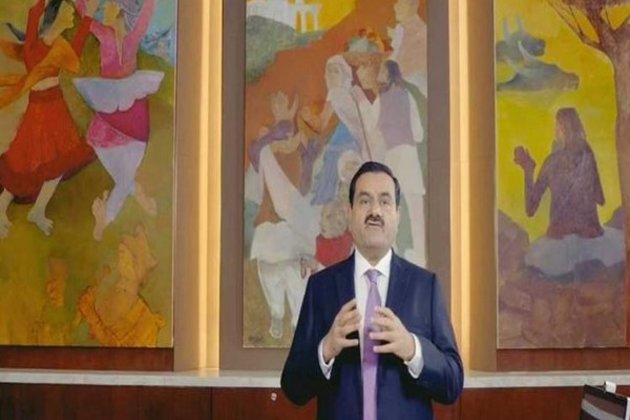 New Delhi [India], June 30 (ANI): Noting that India is the only major nation that will achieve most of the COP 21 climate change goals set for 2030 a full eight years ahead of schedule, Adani Group Chairman Gautam Adani on Wednesday said that climate justice must also mean that the well-being of the developed is not at the expense of the developing countries.

Speaking at the India Global Forum on ‘Energy transition – the Balancing Act’, he said Adani group last month caught up with its renewables target of 25 gigawatts a full four years ahead of schedule and its green energy arm is on track to be the world’s largest renewable energy company by 2030.

He said India’s promises at that time looked bold. “Today, just six years following COP 21, the fact is that India is the only major nation that will achieve most of the COP 21 climate change goals set for 2030 – a full eight years ahead of schedule,” he said.

Adani said that Prime Minister Narendra Modi has now increased the target to 450 gigawatts by 2030.

He said developed and developing worlds must jointly devise measures that permit equitable growth and secure a clean future for all.

“Climate justice must also mean that the well-being of the developed is not at the expense of the developing. The ‘out-of-the-box’ plans and methods that might work for advanced nations will not work for India and 1.4 billion Indians. Nor will they satisfy any of the world’s developing nations. One nation’s dream must not become another nation’s challenge. In my view, the developed world must uniformly understand this better,” he said.

Using a cricketing example, he said those who see the Adani Group solely as India’s largest thermal power producer are watching – not the match – but only “the opening overs”.

He said there is a need to ensure that India does not transition away from fossil fuel at a rate that makes power unaffordable for her millions of citizens.

“We must be careful that our voice – for the environment does not crush the aspirations of the thousands that lack electricity,” he said.

“Our newer infrastructure builds are focused on renewable energy. In 2020, we became the largest solar company in the world – a journey we started in 2015. And last month, we caught up to our renewables target of 25 gigawatts a full four years ahead of schedule. Our green energy arm is on track to be the world’s largest renewable energy company by 2030. I know of no other organisation in the world that has accelerated its renewables footprint as rapidly as the Adani Group,” he said.

He said a key element in the group’s energy balancing act is gas – both LNG and LPG.

“Not only is a gas-based economy beneficial on the sustainability front but it also helps India save valuable foreign exchange and amplifies several nationwide benefits that include reduced health risk”.

Adani said that as part of Atmanirbhar Bharat, the group is now doubling its solar cell and module manufacturing capacity to 4 gigawatts and expanding the domestic manufacturing ecosystem for renewables business, including a new wind turbine manufacturing cluster in Mundra.

“Our commitment to a sustainable future is validated by the fact that no other Indian business house has invested in clean energy and clean technologies as massively – as proactively – and as regularly as we have. This sustainable investment route has certainly paid off for our stakeholders. Since January 2020, the value of our renewables business has increased over 600 times, thereby yielding one of the best returns across all stock markets,” he said.

He said Adani Group’s different businesses are aligned not just with India’s climate change goals but also with the global drive towards net-zero emissions and every new business is driven by sustainability goalsHe said the group will carefully balance its energy migration from carbon-positive to carbon-neutral, and further to carbon-negative.

“The pipeline of renewable projects that we are building, and those that we have already acquired, gives us total confidence,” he said. (ANI)

WASHINGTON (BLOOMBERG, AFP) - Facebook is facing renewed fury from Washington after reports suggested the company knew, but did not disclose, that its … END_OF_DOCUMENT_TOKEN_TO_BE_REPLACED