People in Afghanistan are looking for the return of peace and normal life amid a period of uncertainty.

KABUL, Sept. 1 (Xinhua) — Afghans are expecting peace and harmony, and wish everything to get back on track after the pullout of the last U.S. troops from the country.

“The Taliban firing shots into the air woke me up at midnight. Then I found it was the celebratory firing after the U.S. troops pullout. However, I could not go back to sleep as I was thinking about the loss of my assets in recent days,” money exchanger Najibullah told Xinhua.

“I had a big loss in changing money in recent days. I lost a lot of afghanis and foreign currencies, the afghani is not stable, the exchange rate is rising and falling in hours due to the current political and economic problems,” he said.

Najibullah said he was concerned about the fast changing of afghani to U.S. dollars rate. Currency devaluation directly affected the daily life of the Afghan people, with prices of goods skyrocketing.

The final evacuation flight was conducted in the last hours of Monday night, airlifting the last U.S. military and non-military personnel back home, one day before the Aug. 31 deadline set by U.S. President Joe Biden.

“The United States had withdrawn its troops from Afghanistan after two decades, but the Americans left a mess in our country,” said Khoja Wahid, a Kabul resident, who runs a small factory producing Afghan traditional cloths.

“The United States is defeated and it is badly defeated,” said the 42-year-old man.

“Most of my costumers were Afghans living in the United States and Europe. No people came to buy traditional cloths from my shop and I had to dismiss my workers. I was worried about them,” he said.

Wahid said that he was very happy that with the U.S. troops withdrawal, peace would return to Afghanistan. However, the latest security incidents have shocked him.

“I had never thought that bomb blasts and explosions still occurred,” he said.

He referred to a U.S. drone strike against a house in the west of Hamid Karzai International Airport in Kabul on Sunday, which killed at least 10 civilians, including five children. The U.S. military announced the target was suicide car bomber of an ISIS-K, a local affiliate of the Islamic State group in Afghanistan.

On Aug. 26, an ISIS-K claimed suicide bomb explosion and the ensuing gun firing killed at least 160 Afghans and 13 U.S. troops, and injured nearly 200 others at a gate of the airport, when huge crowds were waiting to board evacuation flights. 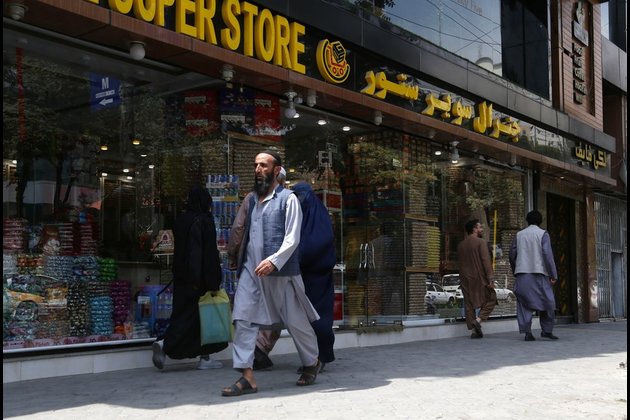 “Kabul started a normal day on Tuesday, the main business hub Mandawi was open. There was traffic jam in central part of the city. The main exchange market was still closed, many exchangers and vendors were doing small business and changing money on the road outside the market,” another money changer Yar Mohammad told Xinhua.

“I came here to pass time, I am the bread earner of a family of eight. It is difficult to earn money,” Mohammad said.

“Banks are still closed, only government and private bank’s main branches are open,” he said.

“I put my money in a bank before Taliban came to Kabul but now I cannot withdraw my money back,” Mohammad said.

“At this difficult time, I wish the Taliban would urgently form a new government. And I hope the Taliban stand on their commitments for creating a broad and inclusive government as soon as possible to end the uncertainty in Afghanistan,” he said.

Although thousands of Afghan experts and highly educated people have left Afghanistan, the young generation is still determined to stay in the country if peace returns and their safety and security are ensured, he said.

WASHINGTON (BLOOMBERG, AFP) - Facebook is facing renewed fury from Washington after reports suggested the company knew, but did not disclose, that its … END_OF_DOCUMENT_TOKEN_TO_BE_REPLACED