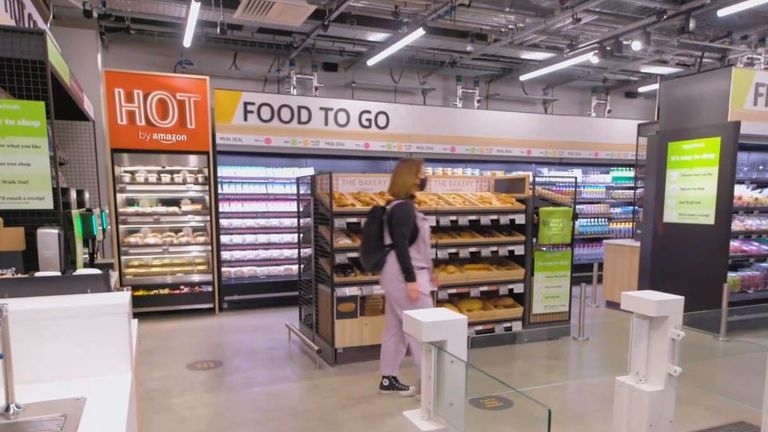 Amazon is reportedly planning to open large department stores in the US as the online shopping titan expands further into physical retail.

The stores will be about 30,000 sq ft in size and will offer products from well-known consumer brands, according to the Wall Street Journal.

The first sites are expected to open in California and Ohio, the report said.

The company opened its first physical cashierless store outside the US in March 2021, selling prepared meals, some groceries, and Amazon devices at its new site in Ealing, London.

Shoppers are watched around the store by cameras and sensors that track which items are placed in a basket, doing away with the need to employ actual members of staff.

In the US, Amazon acquired organic food chain Whole Foods Market for $13.7bn (£10.7bn). It has since launched around two dozen Amazon Go stores, which are also cashierless convenience stores.

It also has two Amazon Go Grocery stores, which are larger in size, and 10 Amazon Fresh supermarkets in California and Illinois.

The company said in March it was looking forward to opening more stores in the Greater London area.

Traditional department stores have been devastated by the arrival of online shopping sites like Amazon. Earlier this year, Debenhams shut its doors for the final time, bringing more than 240 years of retail history to an end.

The department store chain, a staple of high streets since 1778, closed its remaining 28 stores for good after the company collapsed amid the fallout from the COVID-19 pandemic.

E-commerce has also hit large retail chains such as Aldo and Arcadia, the owner of Topshop, both of which have filed for bankruptcy.

Image:
Shoppers are tracked around the store by cameras and sensors that track which items are placed in a basket

Mr Jassy, who took over from founder Jeff Bezos earlier this month, saw the company’s shares fall 7% in after-hours trading as his first set of results as chief executive revealed revenues short of Wall Street expectations.

But the sales figure missed analysts’ estimates of around $115bn (£82bn) and growth was down from 44% in the first quarter.

A forecast for the current July-September period pencilled in revenue growth of no more than 16%.

Amazon also pointed to a profit range which will be lower than the third quarter a year ago.

The company’s finance chief Brian Olsavsky said it faced tough comparisons with 2020 when many consumers were stuck at home and reliant on e-commerce.

WASHINGTON (BLOOMBERG, AFP) - Facebook is facing renewed fury from Washington after reports suggested the company knew, but did not disclose, that its … END_OF_DOCUMENT_TOKEN_TO_BE_REPLACED