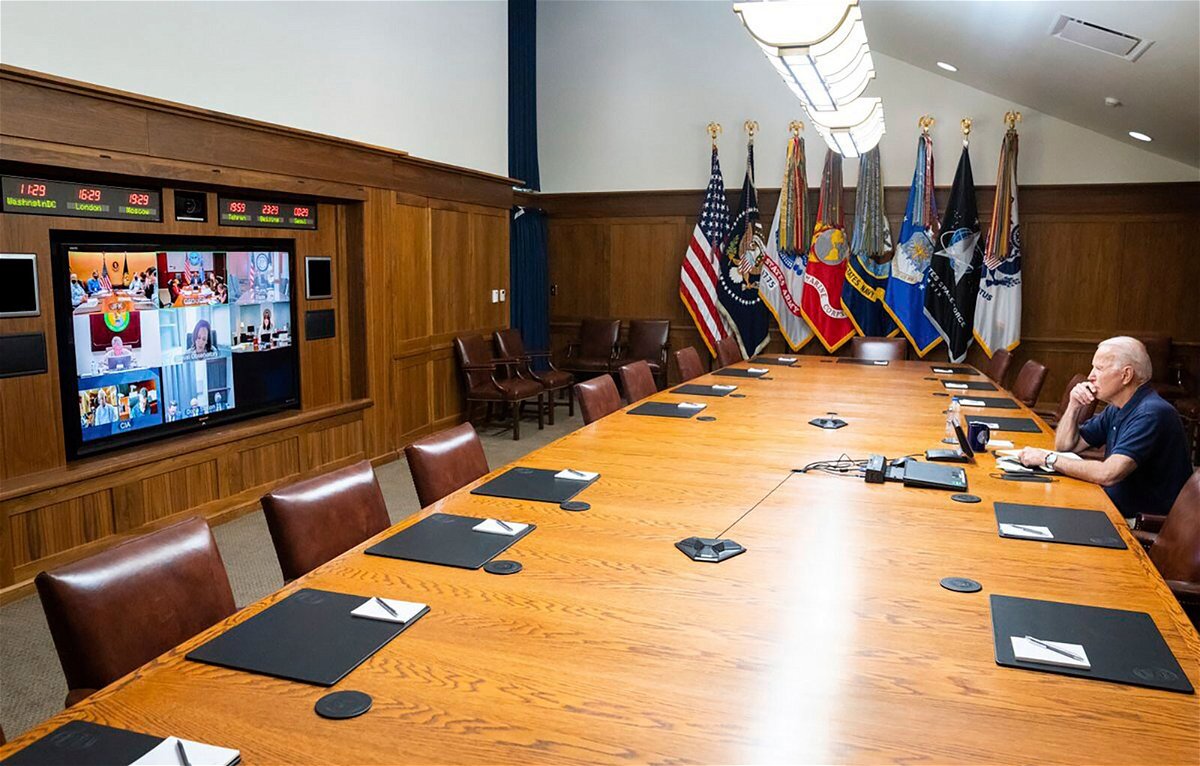 President Joe Biden admitted on Monday that the collapse of the Afghan government and the Taliban retaking control happened more quickly than the US government had anticipated, insisted that ending America’s 20-year war was the correct decision.

But the President refused to back away from his decision to end the American military’s combat mission in the nation, where the US had fought the nation’s longest war, asserting that the US mission was “never supposed to be nation building” and blaming the Afghan government for the fall.

“I stand squarely behind my decision. After 20 years, I’ve learned the hard way that there was never a good time to withdraw US forces,” Biden said during a speech from the East Room of the White House Monday afternoon. “That’s why we’re still there. We were clear-eyed about the risks. We planned for every contingency. But I always promised the American people I would be straight with you. The truth is, this did unfold more quickly than we had anticipated.”

Biden added that the US national interest in Afghanistan has always been “preventing a terrorist attack on American home land,” and that that US mission had already been met.

Despite saying he was willing to take criticism over the decision to withdraw US troops from Afghanistan, Biden pointed fingers at a series of others for the unfolding crisis.

Biden blamed Afghanistan’s armed forces for not standing up to the Taliban’s lightning quick offensive, which put the repressive group back in control of the nation two decades after US troops helped toss the Taliban out of power and the creation of a democratic government.

The President also pointed to the top Afghan leaders as deserving blame.

“So, what happened?” Biden asked. “Afghanistan political leaders gave up and fled the country.”

The President said he had “frank conversations” with Afghan President Ashraf Ghani and Abdullah Abdullah, chairman of the Afghan delegation to peace talks, earlier this summer, but — ultimately — they didn’t take the US’ suggestions.

“We talked about how Afghanistan should prepare to fight their civil wars after the US military departed, to clean up the corruption in government, so the government could function for the Afghan people. We talked extensively about the need for Afghan leaders to unite politically. They failed to do any of that. I also urged them to engage in diplomacy, to seek a political settlement with the Taliban. This advice was flatly refused,” Biden said. “Mr. Ghani insisted that the Afghan forces would fight. And obviously he was wrong.”

Biden also laid part of the blame for the current situation on his predecessor, Donald Trump, who brokered a deal with the Taliban to withdraw American troops by May 1, 2021.

While the majority of Americans support the decision to end the military combat decision in Afghanistan, it remains to be seen how the botched withdrawal will be viewed by the public. The President aimed address potential detractors by asking them a hypothetical question: “How many more generations America’s daughters and sons would you have me send to fight in Afghanistan’s civil war when Afghan troops will not?”

“How many more lives, American lives, is it worth? How many endless rows of headstones Arlington National Cemetery? I’m clear on my answer,” he added.

Biden said that in the coming days the US military will provide assistance to evacuate more Afghans eligible for special immigration visas and their families to the US. Refugee access, he said, will also be expanded to cover “other vulnerable Afghans who work for our embassy … US nongovernmental organizations and Afghans who otherwise are a great risk, and US news agencies.”

The President on Monday claimed that the reason evacuations of SIV applicants were not conducted sooner — perhaps the biggest criticism his administration has received since announcing the withdrawal — was because some Afghans did not want to leave before the situation became dire. He again sought to blame the Afghan government, claiming its leaders were afraid of the optics.

“I know there are concerns about why we did not begin evacuating Afghan civilians sooner. Part of the answer is some of the Afghans did not want to leave earlier, still hopeful for their country. And part of it because the Afghan government and its supporters discouraged us from organizing a mass exodus to avoid triggering, as they said, a crisis of confidence,” Biden said.

Lawmakers and advocacy groups have for months been calling on the Biden administration to accelerate its efforts to get SIV applicants out of Afghanistan, ahead of the US’ military withdrawal from the country.

A State Department spokesperson said on Sunday that the US has relocated nearly 2,000 SIV applicants.

The US, Biden said, has “made it clear to the Taliban if they attack our personnel or disrupt our operation, the US presence will be swift, and the response will be swift and forceful.”

Immediately following the speech, Biden began to return to Camp David, where he spent the weekend on vacation.

During daily video conference calls from the Maryland presidential retreat, Biden has received information and recommendations from military leaders about how to secure the Kabul airport. He had originally been scheduled to remain at Camp David until Wednesday but only briefly returned to the White House for the speech.

The White House released a photograph of a casually dressed Biden receiving a briefing on Sunday. In it, he appeared alone at a large conference table as senior administration officials beamed in from the White House, Pentagon, intelligence agencies and Doha, the Qatari capital.

Speaking Monday on morning television programs, senior members of Biden’s national security team had also sought to shift blame for the collapse of the Afghan government on the country’s defense forces, which they said lacked the will to defend their country against the Taliban.

But they continued to acknowledge that the speed with which Afghan cities fell — ending with Kabul — had caught them by surprise.

“It is certainly the case that the speed with which cities fell was much greater than anyone anticipated,” national security adviser Jake Sullivan said on NBC’s “Today.”

Recriminations over the failure to recognize the shortcomings of the Afghan army, or to predict the speed of its collapse, have been swift since the Taliban claimed control of the country on Sunday. Biden himself repeatedly downplayed the prospect of the Taliban taking over Afghanistan over the past weeks, and rejected the notion Americans would be evacuated from the embassy there — the exact scenario that ended up playing out on Sunday.

Now, scenes from Kabul, including Afghans clinging to the side of moving US military transport planes, have heightened the impression the US war is ending in mayhem. They belie the administration’s descriptions of a “safe and orderly” evacuation from the country.

Biden himself has pressed his national security team to explain how intelligence assessments — which as recently as last month said it could take weeks or months for Kabul to fall after the last US troops withdrew — were so off, according to people familiar with the matter.

At the same time, he has not second-guessed his decision to withdraw. And senior White House advisers said the swift collapse of the Afghan military after years of training from American forces only confirmed the unlikelihood that any more time in the country could change the eventual outcome.

WASHINGTON (BLOOMBERG, AFP) - Facebook is facing renewed fury from Washington after reports suggested the company knew, but did not disclose, that its … END_OF_DOCUMENT_TOKEN_TO_BE_REPLACED