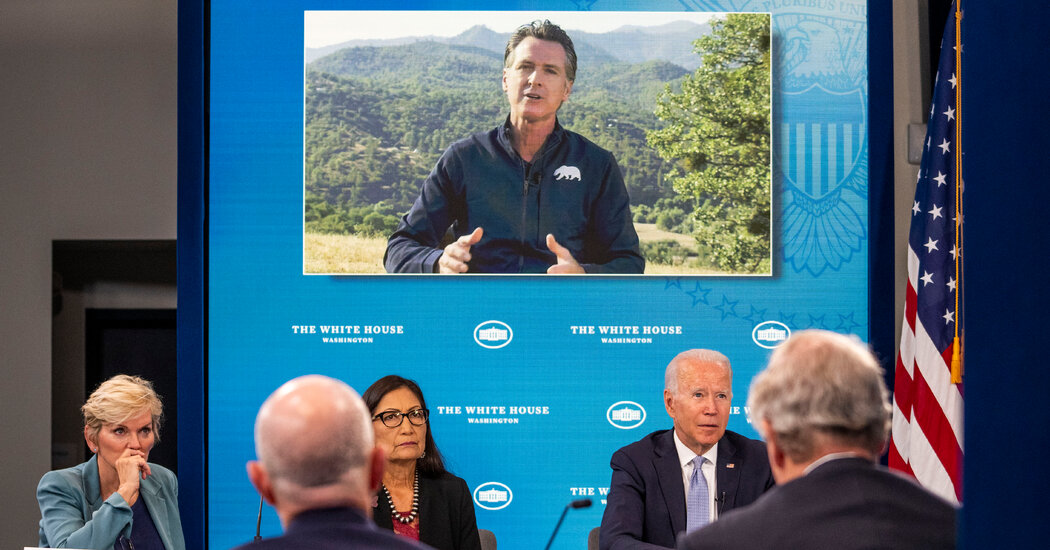 With a record-shattering heat wave suffocating much of the Pacific Northwest and a drought-fueled wildfire season already well underway, President Biden pledged on Wednesday to keep federal firefighters on duty for a longer season, and to increase their pay.

But he cautioned that the United States was years behind in developing a strategy to combat the worsening fires and their underlying causes, including climate change.

“The fact is, we’re playing catch-up,” Mr. Biden said during a virtual meeting with leaders of Western states, adding that he was surprised at the absence of federal attention to the details of firefighting when he came to office. “Right now we have to act, and act fast.”

But many of the proposals Mr. Biden discussed — including a permanent raise for federal firefighters to roughly $15 an hour, early satellite detection of fires and better firefighting equipment — were unlikely to be ready for the wildfire season that has already begun in parts of the West, a senior administration official acknowledged on Wednesday, speaking on the condition of anonymity.

The exception would be some immediate bonuses for firefighters.

Human-caused climate change, combined with continued home construction in fire-prone areas, is making wildfires more frequent and dangerous across the United States. After President Donald J. Trump downplayed both climate change and its link to wildfires, Mr. Biden has sought to show that his administration is grappling with the crisis.

Yet Mr. Biden said there were a few areas where he could act by executive authority, including extending the season for firefighters, so that “seasonal firefighters can stay on the job as long as they are needed.” And he said he was announcing an immediate grant of “fire mitigation funding” to Sonoma County, Calif., which was devastated by fires last year. Sonoma was among the first to apply for the new funding.

Mr. Biden had asked for the briefing on federal and state preparedness for the fire season, similar to what he and his predecessors often receive at the opening of hurricane season.

The eye-popping temperatures across the West this week have added to the alarm over the punishing drought conditions already gripping the region.

California, coming off its worst wildfire season on record last year, is bracing for another summer of destructive fires, with mountain snowpack and reservoir levels already near record lows.

The fires last year caused rolling blackouts and forced evacuations across the region, leaving many people displaced and without power. The current heat wave left tens of thousands without power across Idaho, Oregon, California and Nevada on Monday.

Last week, Mr. Biden met with Deanne Criswell, the administrator of the Federal Emergency Management Agency, to weigh the government’s readiness for extreme weather. It was at that meeting that he promised to increase wages for federal firefighters.

In a call with reporters on Tuesday night, the administration official noted that FEMA was increasing the amount of money it provided to help communities prepare for wildfires and other disasters. But the official acknowledged that those projects were unlikely to take form quickly enough to make a difference this season.

That work, which can include clearing vegetation around homes and replacing roofs made of wood or other combustible material, is both urgent and expensive, said Meghan Housewright, the director of the Fire & Life Safety Policy Institute at the National Fire Protection Association. She said more federal money needed to be directed to that work.

As suffocating heat hits much of Western North America, experts are concerned about human safety and power failures.

“It’s something that’s not necessarily easy for every community to do,” Ms. Housewright said.

The federal government can also increase efforts to thin vegetation in forests, which the Biden administration proposed in May. Yet doing so would require Congress to approve more funding.

Among the most significant ways to reduce the threat of wildfires to people and property are to tighten building standards and landscaping requirements, and to push new development away from areas most exposed to fires, according to experts.

But those approaches tend to be controversial, and also require cooperation from state and local officials, according to Kimiko Barrett, a wildfire policy expert at Headwaters Economics, a consulting group in Montana.

Yet many Western officials resist policy changes that can be interpreted as infringing on private property rights. “We still don’t want to be told what to do with our own home and our own land,” she said.

If Mr. Biden wanted to meaningfully reduce the wildfire threat facing the United States, Dr. Barrett added, he could give states and counties a financial incentive to limit home construction in fire-prone areas, perhaps by tying federal aid to land-use decisions.

By contrast, she described focusing on firefighting and fire suppression as a losing battle, especially as climate change gets worse.

“There’s an expectation that we can still be saved from wildfires by placing more firefighters in front of our home,” Dr. Barrett said. “That’s an incredibly erroneous, costly and deadly mistake.”

WASHINGTON (BLOOMBERG, AFP) - Facebook is facing renewed fury from Washington after reports suggested the company knew, but did not disclose, that its … END_OF_DOCUMENT_TOKEN_TO_BE_REPLACED