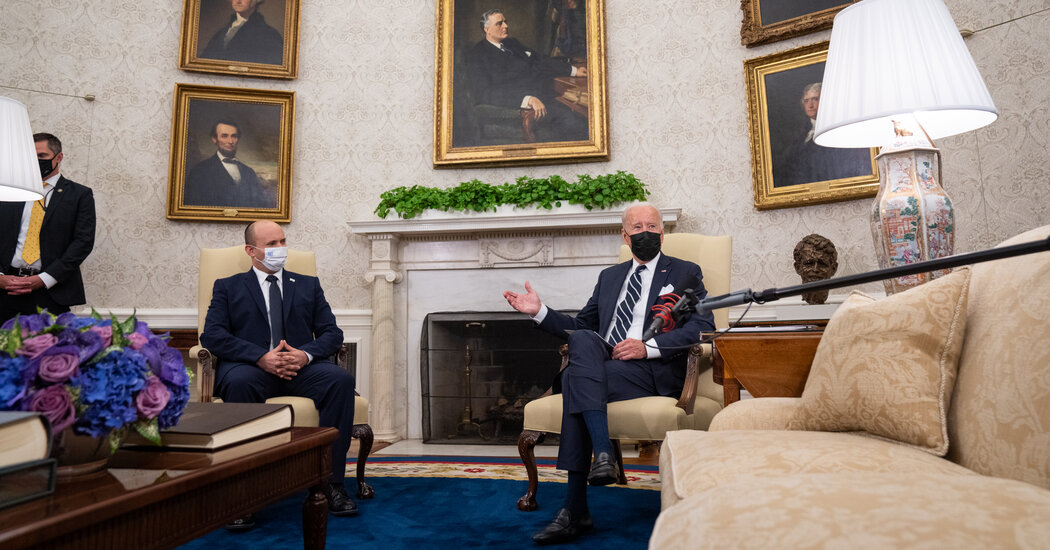 WASHINGTON — President Biden on Friday used his first meeting with Prime Minister Naftali Bennett of Israel to underscore that working closely with a longstanding ally in the Middle East was still a focus of his administration, even as the crisis in Afghanistan has opened him up to criticism that he is ceding ground in the wider region to extremists.

The meeting, originally scheduled for Thursday but delayed a day because of the deadly terrorist bombing at the airport in Kabul that killed 13 U.S. service members, also offered Mr. Biden a brief break from the chaotic withdrawal from Afghanistan and the opportunity to project the confidence of a president consulting with a supportive foreign ally.

“I look forward to us establishing a strong personal relationship,” Mr. Biden said, sitting in the Oval Office next to Mr. Bennett. He said the focus of the meeting was to demonstrate “an unshakable partnership between our two nations.” Both men wore masks.

The two leaders have significant policy differences. In an interview with The New York Times several days before Friday’s meeting, Mr. Bennett said he would oppose American-led attempts to reinstate a lapsed nuclear agreement with Iran and would expand West Bank settlements that Mr. Biden opposes.

Mr. Biden said Friday that they planned to discuss America’s commitment to ensuring that Iran never develops a nuclear weapon.

“We’re putting diplomacy first and seeing where that takes us,” he said. “If diplomacy fails, we’re ready to turn to other options.”

Despite their differences on policy, both leaders were eager for a reset in relations between their countries and to reinforce a bond that has showed signs of strain.

Mr. Biden tried to underscore points of connection. “We’ve become close friends,” he said. “He’s ridden the Amtrak train a lot,” added the president, whose own estimated 8,000 round trips on the line earned him the nickname “Amtrak Joe.” Mr. Biden also noted that he had worked closely with every Israeli prime minister since Golda Meir.

Mr. Bennett arrived at the White House on Friday eager to solidify his place on the world stage and emphasize that his long-serving predecessor, Benjamin Netanyahu, was not irreplaceable. The visit was also an opportunity to make good on his campaign promise that Mr. Netanyahu’s style of direct confrontation with Democrats was not in Israel’s interest.

“I bring with me a new spirit,” he said. “A spirit of good will, a spirit of hope, decency and honesty, a spirit of unity and bipartisanship.”

Mr. Bennett’s new diverse, coalition government, which includes parties that support Palestinian statehood and others opposed, is a powerful example of the kind of democratic norms Mr. Biden has vowed to strengthen, both at home and abroad. The meeting was also an opportunity for him to strengthen Mr. Bennett.

“He’s Biden’s guy,” said Aaron David Miller, a former Middle East negotiator and adviser in Republican and Democratic administrations. “He has offered him a huge respite from what would have been Netanyahu’s highly partisan, politicized courting of Republicans, who would have been only too happy to play along.”

Mr. Miller added that whatever policy differences divided the two leaders, Mr. Biden has a “much stronger incentive in ensuring Bennett survives and Netanyahu doesn’t come back into power.”

The meeting was unusual in that it fell in the middle of the worst foreign policy crisis of Mr. Biden’s presidency so far and may have served as a reminder that Israel would be far down on the list of Mr. Biden’s priorities in the months and years to come. Still, as Mr. Biden learned in the early months of his presidency when the worst fighting between Israelis and Palestinians in seven years broke out, crises in the Middle East are hard to avoid.

“With any American president, you have to be able to show you can walk and chew gum at the same time,” said Lucy Kurtzer-Ellenbogen, the director of the Israeli-Palestinian conflict program at the United States Institute of Peace. “A lot of the criticism about Afghanistan is that it’s an abandonment of traditional U.S. allies. This was an opportunity to sit with a longstanding, steadfast ally and say this is still a focus and we will work side by side.”

WASHINGTON (BLOOMBERG, AFP) - Facebook is facing renewed fury from Washington after reports suggested the company knew, but did not disclose, that its … END_OF_DOCUMENT_TOKEN_TO_BE_REPLACED