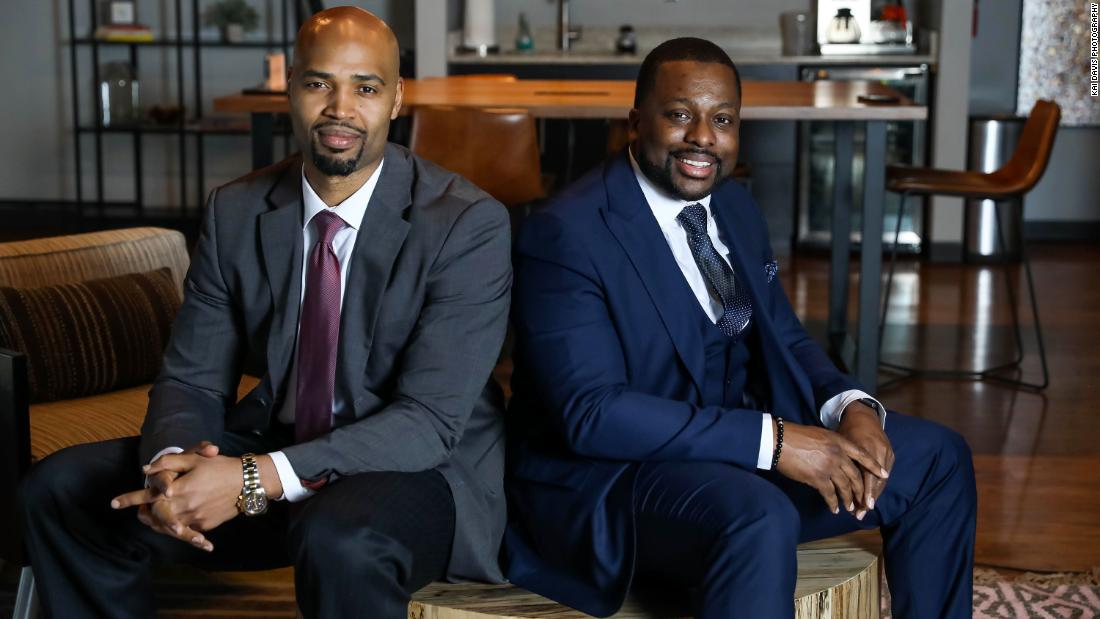 On Tuesday, Williams announced the winners of his Black Ambition prize competition — and Turk and his business partner, Andre Davis, are in the national spotlight.

Williams’ non-profit was founded in December to help Black and Latino business owners close the wealth gap through entrepreneurship.

Turk and Davis, co-founders of Livegistics, took home the top prize of $1 million. The Detroit-based entrepreneurs run a cloud-based material management software company, which eliminates paperwork in heavy civil construction and demolition. The company also provides data and metrics that construction experts can use for efficiency.

“We knew we had something special, but you don’t go in thinking you will walk away with $1 million. But when it happens you are like, ‘Wow, we just won $1 million,'” Turk said.

But the 40-year-old said he never knew joy and pain could co-exist simultaneously.

Success can be bittersweet

On the day he learned his tech start-up won the grand prize, his father-in-law died before he could share the news.

“All in 24 hours, it was the greatest and worst moments tied together forever. There we were with the our biggest business success to date along with the worst day of our lives all in 24 hours,” Turk said. “It is weird. Sometimes I feel guilty for being so happy about what’s going on, but I know he would have been excited.”

Turk, who co-founded the business three years ago with Davis, said that hours after he learned about winning he watched a team of health care professionals try to revive his wife’s father, whom he admired. He was a veteran who loved architecture. And they shared the same passion for construction.

Instead of hosting a celebration party for friends and family, Turk said he will bury his father-in-law in a private ceremony Saturday.

Turk’s and Davis’ friendship goes back decades. The two met in elementary school when they were 5 years old, Davis said. Then, they were college roommates at Bowling Green State University in Ohio. Davis, the chief financial officer, said it was never a goal to become business partners but it made sense.

“He’s been in just about every special moment in my life,” Davis said. “Not only are we solving the single most significant reason construction companies go out of business (cash flow), we’re doing so in a manner that creates less work and makes the lives of our customers easier to manage.”

Davis, 41, said he worked at Financial One as an outsourced CFO to clients in the Metro Detroit area. He started and operated his own accounting and financial services practice for 10 years, managing to keep one foot in the non-profit sector to give back. He wants to encourage other Black and minority entrepreneurs looking to start their businesses to take the leap of faith.

“A thought today, backed by effort today, is one step closer to your dream tomorrow. Justin is brilliant. His background is the foundation for what I forsee as a unicorn in the making,” Davis said. “A third generation business owner, minority-owned, who understands all facets of large construction projects at an expert level…who also has a degree in computer science to speak tech geek language! You don’t find a Justin Turk walking around every day.”

Together, the hybrid team beat out nearly 1,700 applicants to win the grand prize. Williams, who announced the initiative in December, congratulated the team on Twitter Tuesday, saying, “We are so inspired by you and can’t wait to see how you change the world.”

Turk and Davis said this win is bigger than them. It’s about opening the door for the next person.

“Winning this competition is bigger than just the prize money,” Turk said. “When we first entered the tech start-up world as two Black entrepreneurs, we had no idea how to navigate in this space.”

Turk said they are not only being taught how to navigate, “but also to dominate in an industry that just recently decided to grant access to people of color.”

The win will break open doors. And Turk has an another goal.

“We don’t just want an invite, we want to create the guest list,” he said.

(The Center Square) – A federal judge has ruled Union City farmer Robert Holman’s lawsuit against the U.S. Department of Agriculture over COVID-19 … END_OF_DOCUMENT_TOKEN_TO_BE_REPLACED