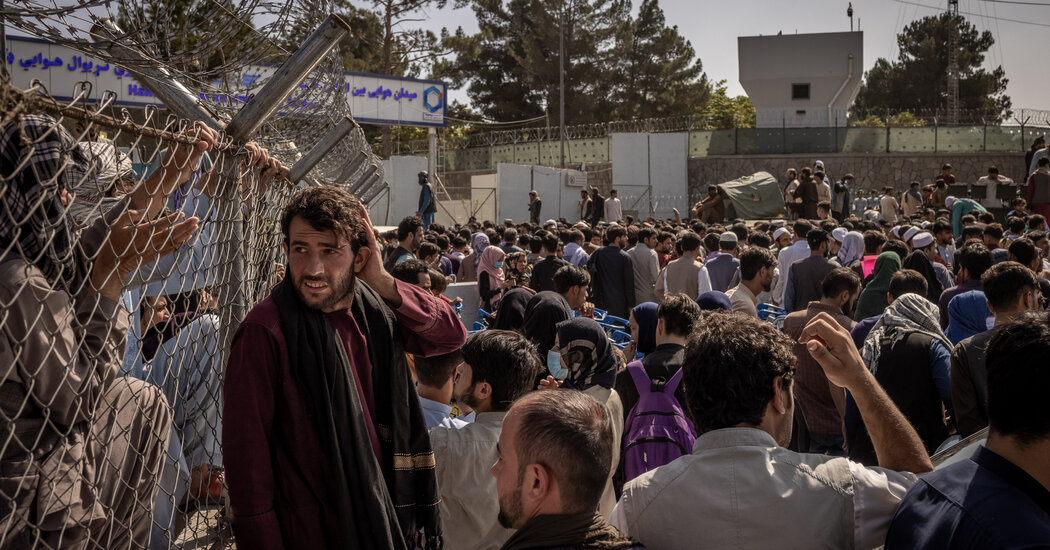 WASHINGTON — The Air Force acknowledged on Tuesday that human body parts were found in the wheel well of an American military C-17 cargo plane that took flight amid chaos at Hamid Karzai International Airport in Afghanistan’s capital, Kabul.

Air Force officials have not said how many people died in the episode on Monday, but said the service was investigating “the loss of civilian lives” as a crowd of Afghans, desperate to escape the country after their government collapsed to the Taliban, climbed onto the plane’s wings and fell from the sky after it took off.

Harrowing video of the episode, recorded by the Afghan news media, has circulated around the world, instantly making the horrific scene — of American military might flying away as Afghans hung on against all hope — a symbol of President Biden’s retreat from Afghanistan.

“We are all contending with a human cost to these developments,” Jake Sullivan, the national security adviser, said at a briefing on Tuesday.

“The images from the past couple of days at the airport have been heartbreaking,” said Mr. Sullivan, the first cabinet-level administration official to take questions from reporters since the Taliban took control of Kabul on Sunday.

Gen. Kenneth F. McKenzie Jr., the top military officer in charge of Afghanistan, flew to Kabul on Tuesday, where, he said, commercial flights had resumed after they were paused to secure the field. A White House official said U.S. military flights evacuated about 1,100 people on Tuesday, bringing the total so far to more than 3,200.

American pilots and troops were forced to make on-the-spot decisions during the panic at the airport on Sunday and Monday. Another C-17 transport plane left Kabul late Sunday night with 640 people crowded on board, more than double the planned number, military officials said, after hundreds of Afghans who had been cleared by the State Department to be evacuated surged onto loading ramps. The pilots, determining that the immense aircraft could handle the load, decided to take off, officials said. That plane landed safely at its destination with the Afghans aboard.

But the people who tried the next day on a different C-17 were not so fortunate.

Early Monday morning, the gray Air Force plane — call sign REACH885 — descended onto the runway. The lumbering jet was carrying equipment and supplies for the U.S. Marines and soldiers on the ground securing the airport and helping with the evacuation of thousands of Americans and Afghans.

Minutes after the plane touched down, rolled to a stop and lowered its rear ramp, hundreds, perhaps thousands of Afghans, rushed forward as the small crew watched in alarm.

The crew was aware of what had happened the night before. On Monday morning, the number of people at the airport clamoring to get onto flights had swelled. The crew members feared for their safety, jumped back up into the plane and pulled up the loading ramp before they had finished unloading, officials said.

By then, throngs of Afghans had climbed aboard the wings of the plane and, unbeknown to the crew, officials said, into the wheel well into which the landing gear would fold after takeoff.

The crew contacted air traffic control, operated by U.S. military personnel, and the plane was cleared for takeoff, after spending only minutes on the ground.

Mindful of the people hanging onto the plane, the pilots taxied slowly at first. Military Humvees rushed alongside trying to chase people away and off the plane. Two Apache helicopter gunships flew low, seeking to scare some people away from the plane or push them off with their powerful rotor wash.

REACH885 accelerated and was airborne.

Minutes later, however, the pilot and co-pilot realized they had a serious problem: The landing gear would not fully retract. They sent one of the crew members down to peer through a small porthole that allows them to view potential problems in the wheel well while aloft.

It was then the crew saw the remains of an undetermined number of Afghans who had stowed away in the wheel well — apparently crushed by the landing gear. Scenes captured in videos of the flight showed other people plunging to their death.

After the four-hour flight, the plane landed at its destination, Al Udeid Air Base in Qatar, which has become the hub for receiving passengers, including Americans and Afghans, eventually bound for the United States.

Alerted of the tragedy on board, mental health counselors and chaplains met the anguished crew members as they disembarked.

“Safety officials are doing due diligence to better understand how events unfolded,” Ann Stefanek, an Air Force spokeswoman, said in the statement.

WASHINGTON (BLOOMBERG, AFP) - Facebook is facing renewed fury from Washington after reports suggested the company knew, but did not disclose, that its … END_OF_DOCUMENT_TOKEN_TO_BE_REPLACED