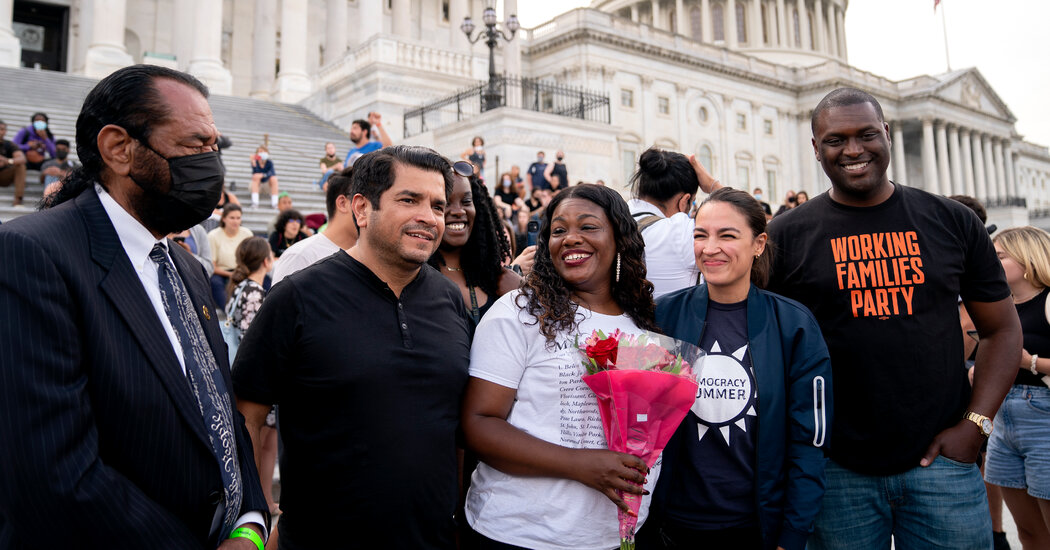 WASHINGTON — Representative Cori Bush of Missouri was 20 the first time she was evicted, tossed out by a landlord after a violent fight with her boyfriend.

The next time, she was 29 and had quit a low-wage job to attend nursing school, and could no longer afford her rent.

It happened a third time in 2015, as Ms. Bush threw herself into the protest movement in Ferguson, Mo., after a white police officer shot and killed Michael Brown, a Black teenager. The eviction notice was waiting on her door one night — prompted, she said, by neighbors who feared she would bring the unrest home with her.

So when it became clear on Friday night that neither Congress nor the White House was going to act to stop a pandemic-era federal eviction moratorium from expiring, leaving hundreds of thousands of low-income Americans at risk of losing their homes, Ms. Bush — now 45 and a first-term Democratic congresswoman from St. Louis — felt a familiar flood of anxiety and a flash of purpose.

As her colleagues boarded planes home for a seven-week summer recess, she took a page from her years as an activist and did the only thing she could think of: She got an orange sleeping bag, grabbed a lawn chair and began what turned into a round-the-clock sit-in on the steps of the United States Capitol that galvanized a full-on progressive revolt.

She stayed put — in rain, cold and brutal summer heat — until Tuesday, when President Biden, under growing pressure from Ms. Bush’s group and Speaker Nancy Pelosi, abruptly relented and announced a new, 60-day federal eviction moratorium covering areas overrun with the Delta variant of the coronavirus. Even as Mr. Biden reiterated his administration’s fears that the ban would run afoul of the courts, it was a striking reversal for his team, designed to give state and local governments time to distribute billions of dollars in federal rental assistance that has yet to go out the door.

“My brain could not understand how we were supposed to just leave,” Ms. Bush said in an interview on Wednesday, recounting the months she spent 20 years ago living out of a 1996 Ford Explorer. “I felt like I did sitting in that car — like, ‘Who speaks for me? Is this because I deserve it?’”

Furious that the White House had tried to punt the political mess to Congress, Ms. Pelosi had been forcefully waging a battle of her own, quietly working the levers of power available to influential political operators in Washington. She spoke to Mr. Biden directly and issued uncompromising statements urging him to use executive authority to extend the moratorium unilaterally, despite the risk of an adverse court ruling. Congress, she said, simply did not have the votes to solve the problem.

But it was Ms. Bush, using the tactics of a street organizer — alongside fellow progressives like Alexandria Ocasio-Cortez of New York and Ayanna Pressley of Massachusetts, who joined her encampment — who thrust the issue into the national consciousness and refused to let it go. They marshaled huge social media followings, the attention of a news media eager to cover intraparty conflict and direct confrontations with party leaders to all but shame them into finding a solution.

Several administration officials involved in the recent deliberations credited Ms. Bush — and the credibility of a protest rooted in her experience — with adding to the sense of urgency that contributed to the extension of the moratorium.

Their success has sent a bolt of energy through the progressive movement that Ms. Bush and others now hope will signal the start of a new, more assertive phase in Washington. It comes as liberals are reeling from the latest in a string of electoral defeats after Nina Turner, a progressive insurgent, lost a special-election primary in Cleveland on Tuesday to an establishment-backed candidate, Shontel Brown.

Though Democrats’ spare majorities in the House and Senate give the bloc the power to make or break legislation, they have so far mostly hesitated to use it, watching instead with frustration as Mr. Biden’s drive to strike a bipartisan infrastructure deal with moderates has pushed their priorities — from voting rights to climate change — to the back burner.

“I hope people see right now that I mean what I say,” Ms. Bush said. “Hopefully, this has shown not only leadership, the caucus, but our progressive family that when we say we are not going to back down, we don’t back down. And when we say our communities need this particular thing, we can stand together to work together to get it.”

The victory could be fleeting; even Mr. Biden conceded that most constitutional scholars believed his administration’s latest eviction freeze lacked a legal basis.

But for now, the episode has offered a welcome taste of vindication for Ms. Bush, who has faced doubts and criticisms from some in her party ever since she unexpectedly upset a moderate 10-term Democratic incumbent in a primary one year ago this week in a campaign promising to bring her zeal for activism to Congress.

Her opponent then, Wiliam Lacy Clay Jr., tried to weaponize Ms. Bush’s patchy work history and financial woes, reminding voters of her evictions and that she had struggled to hold down a job. His message was clear: She lacked the kind of experience needed to make a difference in Congress and could not be trusted with public office.

Her critics on the left and right similarly scoffed in recent days at her protest, calling it naïve. Conservative Twitter delighted in making jokes about the unruly sleepover scene on the Capitol’s marble steps. One commentator, Ben Shapiro, called it “unbelievably off-putting and stupid.”

Even fellow liberals who shared her goal questioned Ms. Bush’s hard-nosed tactics, which they privately groused were inappropriate and ineffective for a member of Congress. The liberal editorial board of her hometown newspaper, the St. Louis Post-Dispatch, wrote on Tuesday that Ms. Bush “clearly misunderstands the complicated process required to restore the moratorium.”

But many of Ms. Bush’s colleagues, including some high-profile Democrats, saw a political moment in the making.

Senator Bernie Sanders of Vermont was there on Monday, grinning with his arms around Ms. Bush and Ms. Ocasio-Cortez. Representative Joyce Beatty of Ohio, the chairwoman of the Congressional Black Caucus who has been critical of progressives like Ms. Bush challenging Black incumbents like Mr. Clay, flew back from Ohio to pay a visit after Ms. Bush called to invite her personally. Senator Chuck Schumer of New York, the majority leader who is angling to fend off a progressive challenger as he seeks re-election next year, came by twice.

When an aide to Ms. Bush learned from Capitol Police that Vice President Kamala Harris would be in the Senate on Monday, Ms. Bush took off running from the House steps in pursuit.

“I wanted to look her in her eyes,” Ms. Bush said. “I wanted her to look me in mine and see down to my soul everything that was happening on the inside of me — to see St. Louis, to see the pain of regular people.”

Kayla Reed, a St. Louis organizer who met Ms. Bush around the demonstrations in Ferguson, said she could draw a direct line from those early protests to the congresswoman’s impatient, insurgent style of politics Ms. Bush, Ms. Ocasio-Cortez and others are now using to test the mettle of their party.

“What she did was not allow the conversation to end at ‘Congress wasn’t able to extend it and there was no other way forward,’ ” said Ms. Reed, who now leads a group, Action St. Louis, that has been working with renters facing evictions. “She applied pressure.”

She added, “This absolutely wouldn’t have been the case with her predecessor.”

Some of Ms. Bush’s colleagues in Washington reached the same conclusion.

On Tuesday evening, before Ms. Bush could go live for a round of valedictory television hits and eventually collapse for a decent night’s sleep in her own bed, Senator Elizabeth Warren, the Massachusetts Democrat and progressive standard-bearer, ran up and wrapped her arms around the congresswoman.

“You know when I came here, I used to ask myself a question: ‘Does it matter that I’m here instead of someone else?’” Ms. Warren, who spent much of her career in academia, told Ms. Bush. “And you’ve now answered that question. It matters that you’re here — not someone else.”

WASHINGTON (BLOOMBERG, AFP) - Facebook is facing renewed fury from Washington after reports suggested the company knew, but did not disclose, that its … END_OF_DOCUMENT_TOKEN_TO_BE_REPLACED