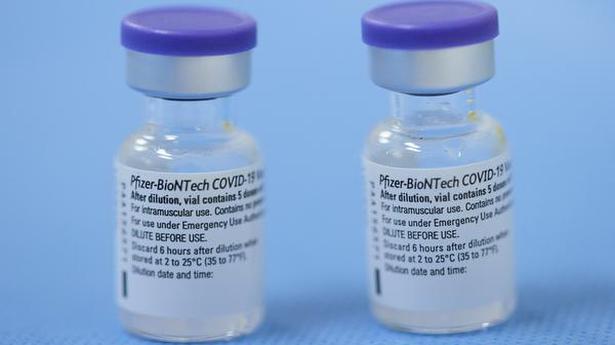 Delay is not from the U.S. side, says an American Embassy spokesperson

More than a month after the United States announced the donation of 80 million doses of American-made COVID vaccines to dozens of countries including India, and Vice-President Kamala Harris called Prime Minister Narendra Modi to convey the decision, the vaccines are being held up by regulatory issues over indemnity, Indian and U.S. officials confirmed.

According to the officials, the demand by the U.S. companies including Pfizer, Moderna and Johnson and Johnson to be granted an indemnity or waiver of liability has yet to be resolved for commercial distribution, which is also holding up the donations from the U.S. Since June 3, the U.S. has already distributed 40 million doses to about 12 countries including Pakistan and Bangladesh.

“The delay is not from the U.S. side,” an American Embassy spokesperson said to queries about the fact that the shipments are yet to be announced. “India has determined that it needs further time to review legal provisions related to accepting vaccine donations. Once India works through its legal process, our donation of vaccines to India will proceed expeditiously.”

The MEA declined to comment on the issue, directing queries to the Ministry of Health. Health Secretary Bharat Bhushan told The Hindu that the “specific provisions of indemnification are still under discussion”, indicating that not only are the U.S. vaccine donations on hold for the moment, but casting a cloud over the delivery of Moderna vaccines, which have already received Emergency Use Authorisation (EUA) in India, of which the first consignment was due to arrive this week.

During his visit to the U.S. in May, External Affairs Minister S. Jaishankar had met pharma company executives and U.S. business chambers who had conveyed concerns about India’s request for them to provide vaccines without receiving indemnity in case of side effects found by those being administered the vaccines. The indemnity would be used as a legal defence to protect the U.S. companies, who have pointed out that they cannot take responsibility for cold-chain lapses and storage and transportation problems within India.

“Yes, liability issues remain unresolved,” confirmed one official involved in the negotiations, adding that the ‘dilemma’ on the Indian side is that if the U.S. companies are given indemnities, all vaccine manufacturers, including Serum Institute, Bharat Biotech and Sputnik would also demand the same flexibility.

Last month, the U.S. announced the distribution of 80 million doses of American made vaccines as part of its “COVID-19 Global Response and Recovery Framework”. While a specific number of doses was not announced for any country, India was put in two baskets: among 19 Asian countries that would receive 23 million doses and 14 regional partners that would receive an additional 6 million doses in all. Indian officials had estimated at the time that India’s share would total not more than a mere 2 million doses, less than half of its daily dispersal of vaccines, but said the donation was important as it made more types of vaccines available to Indians.

The countries that have received the U.S. donations so far include South Korea, Mexico, Canada, Brazil, Taiwan, Honduras, Colombia, Pakistan, Peru, Ecuador, Malaysia, & Bangladesh. Other nations like Sri Lanka received the first batch of an expected five million doses of Pfizer/BioNTech vaccines that are being funded by the World Bank, while Maldives had earlier received Pfizer vaccines through the international COVAX alliance.

“Before we can ship doses, each country must complete its own domestic set of operational, regulatory, and legal processes that are specific to each country,” the U.S. Embassy spokesperson said, in an explanation of how other countries had received their doses.

(With inputs from Bindu Shajan Perappadan)

WASHINGTON (BLOOMBERG, AFP) - Facebook is facing renewed fury from Washington after reports suggested the company knew, but did not disclose, that its … END_OF_DOCUMENT_TOKEN_TO_BE_REPLACED