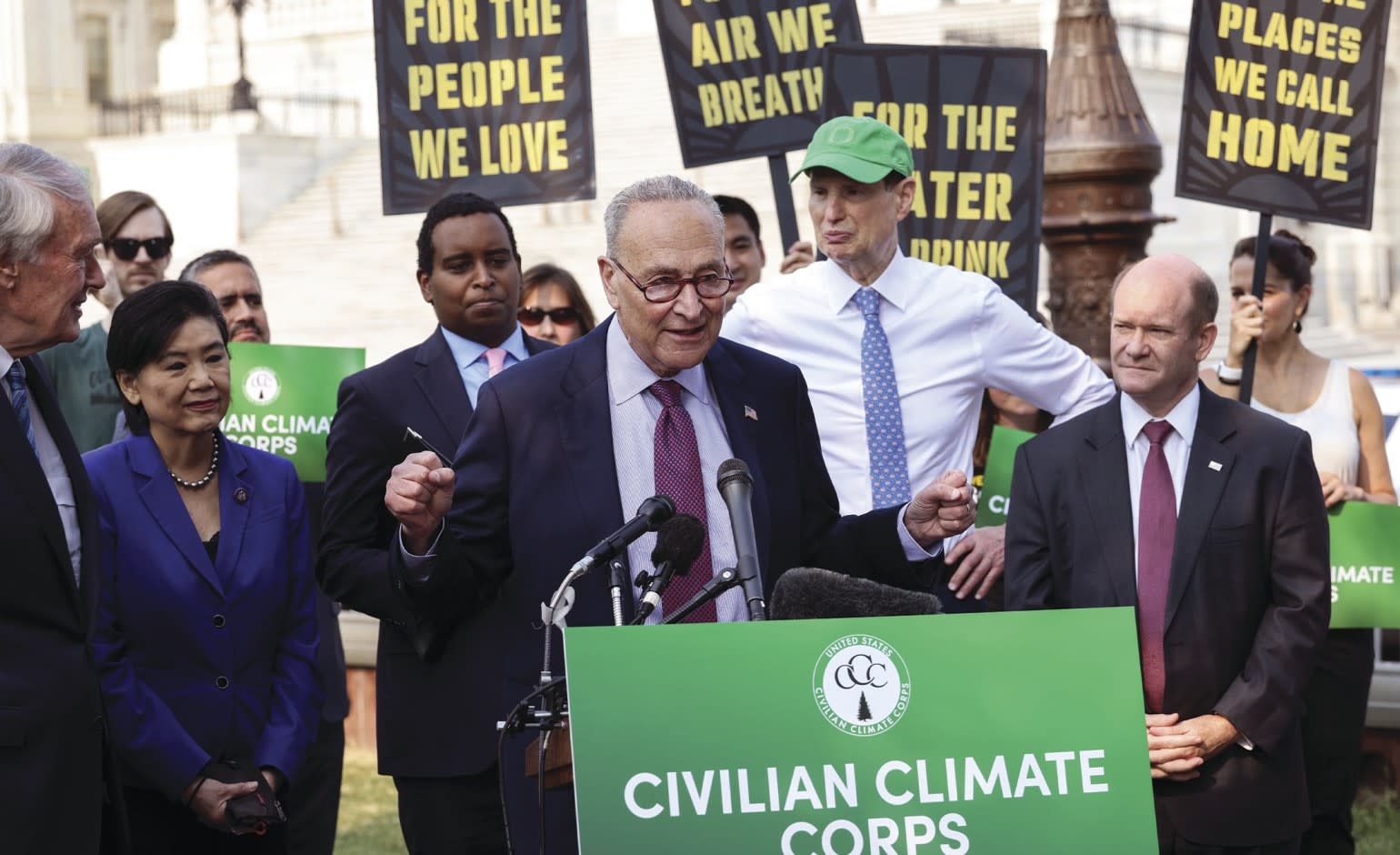 Democrats’ gambit to impose a fee on imports of carbon-intensive goods is being met with a split reaction among business interests that stand to benefit or suffer from a new form of protectionist trade policy linked to addressing climate change.

Sen. Chris Coons of Delaware and Rep. Scott Peters of California say their legislation, introduced on July 19, is intended to protect the competitiveness of U.S. industries exposed to domestic climate rules, and that could be further strained as the Biden administration develops more aggressive policies.

It would force companies abroad that are not subject to strict environmental rules and want to sell commodities to the United States to pay a price for each ton of carbon dioxide they emit in making their products, which would remove any competitive advantage they might otherwise have.

Coons and Peters hope to attach their bill to Senate Democrats’ $3.5 trillion tax and spending infrastructure proposal in a bid to keep up with the European Union, which recently proposed its own border carbon adjustment on imports from countries that lack aggressive emissions-reduction policies.

Kevin Dempsey, president and CEO of the American Iron and Steel Institute, welcomed Democrats’ effort to impose a border carbon adjustment, as the policy is called.

He said a U.S. border fee would remove the “perverse incentive” for domestic companies to import dirtier steel from places such as China with weaker environmental rules.

“For the U.S. steel industry, it’s a no-brainer that a BCA is a good idea,” Dempsey told the Washington Examiner. “Steel is a big part of the solution to how we get to a greener economy as a key input to wind turbines, solar panels, and electric vehicles, so we should make sure we are incentivizing the use of the cleanest steel, which is steel made in the U.S.”

But other industries that rely on imports of the implicated products could see their prices rise and pass those on to consumers.

Tim Phillips, president of Americans for Prosperity, a conservative political group aligned with oil and gas billionaire Charles Koch, said in a statement Thursday that imposing a border carbon tax would cause “incredible harm to our economy” and “invite retaliatory tariffs from other countries,” leading to higher prices.

The U.S. refining sector, for example, that transforms crude oil into fuels, relies on imports for multiple types of petroleum to which fees might apply. Many U.S. refineries were built to run medium and heavy crude of the type that Saudi Arabia makes and can’t easily rely on U.S. shale producers specializing in light, sweet oil.

“There are some industries heavily reliant on imports from economies that are emissions-intensive that could be losers,” said Kevin Book, managing director of ClearView Energy, a research group. “It will raise prices on the end-user, and that will destroy demand.”

Brian Flannery, visiting fellow at Resources for the Future, raised the possibility that the U.S. and Europe raising the prospect of carbon import fees could disrupt global trade.

“I see the potential of a challenge to trade immediately,” Flannery said. “I wonder about the impact on supply chains. Automobiles are sourced in many jurisdictions, and pieces move back and forth. If they get taxed at every step in the process, that could have a big impact on commercial relations.”

But domestic industrial manufacturers could be the big winners from a U.S. border carbon adjustment.

According to research from the Climate Leadership Council, U.S. heavy industries, including steel, already have an advantage over China, India, and even Europe in producing goods and services at lower rates of carbon emissions.

The council’s report shows goods produced in the U.S. are 80% more carbon-efficient than the world average.

That means if subject to a U.S. carbon import fee, overseas businesses looking to export their goods here would pay a higher price compared to domestic manufacturers with a smaller pollution footprint, leaving the U.S. companies better off.

“If we are looking at the relative carbon intensity of U.S. production, our manufacturers are exceptionally clean and well-positioned to compete based on carbon intensity,” said Catrina Rorke, the Climate Leadership Council’s vice president for policy.

U.S. steel has a particular advantage compared to competitors, as about 70% of domestic steel is produced using electric arc furnaces that use entirely recycled scrap, producing a much lower carbon footprint than blast furnaces.

Of the seven largest steel-producing countries, the U.S. has the lowest carbon emissions per ton of steel produced, according to the steel institute.

China emits 2.5 times the amount of carbon per ton of steel.

“A border carbon adjustment passed in the U.S. on steel might favor U.S. production and exports,” said Julio Friedmann, a senior research scholar at the Center for Global Energy Policy at Columbia University.

Friedmann and other experts, however, said the fortunes of U.S. steel and other industries could hinge on how a carbon import fee program is drafted and enforced.

As one example, Flannery said a well-designed border adjustment should pair import taxes with export rebates, but both the U.S. and EU proposals do not do this.

An export rebate would similarly allow manufacturers shipping goods out of the country to keep their edge against foreign competitors that are not subject to strict carbon rules. That could benefit industries such as U.S. natural gas producers that have become increasingly reliant on liquefied natural gas exports to Europe and Asia.

“Without an export rebate, you are not addressing the entire problem of economic competitiveness,” Flannery said.

Another key challenge facing policymakers is how to balance the goals of reducing global carbon emissions while protecting domestic industry and jobs, which don’t easily go hand in hand.

Combating global warming requires international cooperation, but threats to impose import tariffs could antagonize Asian nations with large carbon footprints such as China that are key to solving the climate problem.

WASHINGTON (BLOOMBERG, AFP) - Facebook is facing renewed fury from Washington after reports suggested the company knew, but did not disclose, that its … END_OF_DOCUMENT_TOKEN_TO_BE_REPLACED