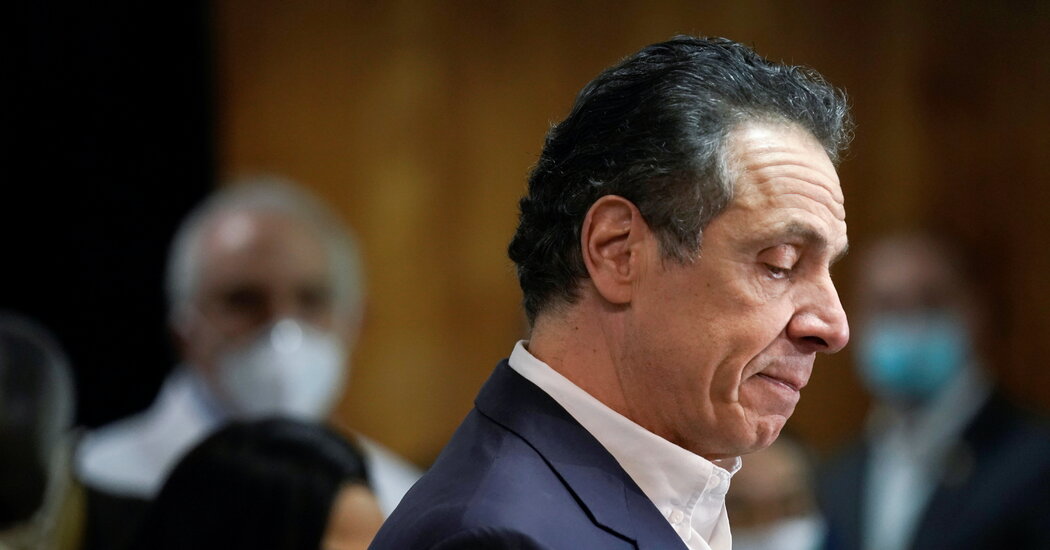 When an independent report declared last week that one of the nation’s most prominent Democratic leaders had sexually harassed 11 women, even some of his closest friends and oldest allies had finally run out of patience with Andrew M. Cuomo.

One by one, they dropped him. President Biden, House Speaker Nancy Pelosi and the highest-ranking members of Congress from New York issued a message that left no room for interpretation: The governor had to go.

The rapidity with which Mr. Cuomo has been cast out reflects not only how completely he alienated virtually every ally he once had, but also the possibility of political peril for a party that yoked its brand to the #MeToo movement during the Trump era, staking its reputation on a commitment to social equality and female empowerment.

Already, New York Democratic officials, activists and strategists have begun privately discussing around a half-dozen politicians capable of succeeding Mr. Cuomo, with some potential candidates or their allies starting to gauge interest and identify possible sources of support. They include several who national Democrats believe would easily win a general election in the lopsidedly Democratic state — among them women and people of color whose ascension to the governor’s office in Albany could burnish the party’s image for inclusiveness.

The turnabout in a few days’ time was whipsawing. Only a year ago a pillar of his party and the star of daily pandemic briefings, and still presumed by many to be the front-runner for a fourth term in 2022, Mr. Cuomo suddenly seemed eminently beatable, should he survive and persist with a campaign. And the political conversation crackled with the excitement and guesswork of an open race — with the guessing largely focused for the moment on whether Attorney General Letitia James, whose office released the independent report substantiating Mr. Cuomo’s misdeeds, would run for governor herself.

The longer it takes for Mr. Cuomo’s fate to be resolved, the greater the headache for Democrats.

Some Republicans have already used Mr. Cuomo’s situation to accuse Democrats of hypocrisy: In Virginia, the state G.O.P. called on Gov. Ralph Northam and the Democratic nominee to succeed him, Terry McAuliffe, to renounce Mr. Cuomo, saying “their silence is complicity.” In Congress, Senator Joni Ernst, an Iowa Republican, introduced a “Cuomo amendment” to prohibit federal infrastructure funding from being allocated to states led by governors who have sexually harassed their employees.

And Representative Lee Zeldin of Long Island, a prominent Republican contender for governor and an avid Trump supporter, has been able to focus his early campaigning on Mr. Cuomo rather than having to defend his fealty to the former president, an enormous liability in a state that Mr. Trump lost to Mr. Biden by 20 percentage points.

Representative Grace Meng of Queens, who served until January as a vice chair of the Democratic National Committee, suggested that party leaders had no patience for allowing the situation to fester, particularly as they continue to grapple with the challenges of the pandemic.

“We have midterm elections coming up, and we need to make sure that we are focused on maintaining the House and the Senate,” Ms. Meng said. “There’s just no room for distractions right now.”

Although Mr. Cuomo has given no indication that he plans to resign, dispatching his lawyers to mount an aggressive televised defense of his conduct, the State Assembly is moving quickly through an impeachment inquiry, raising hopes within the party that the governor’s future will be determined long before the midterm elections. Prosecutors from Long Island to Albany are pursing criminal investigations into the allegations of sexual harassment, raising the pressure on Mr. Cuomo to step down.

His top aide, Melissa DeRosa, said late Sunday that she had resigned, leaving Mr. Cuomo facing the impeachment process without one of his most trusted strategists. And Brittany Commisso, the executive assistant who accused Mr. Cuomo of groping her and filed a criminal complaint against him, gave a televised interview forcefully pushing back on claims made by the governor’s attorney that she had welcomed the physical contact.

The Rev. Al Sharpton, whom Mr. Cuomo featured in a video montage as he sought to defend himself last week, offered an unsparing assessment of the governor’s political hopes. “I don’t see how he does survive this,” he said.

But Mr. Cuomo, who has come back from less challenging predicaments before, may not go quickly or quietly.

An impeachment proceeding would be uncharted territory for the State Assembly in the modern era, and many Democrats expect Mr. Cuomo to mount an aggressive defense, which could draw out the proceedings, fuel Republican attacks and keep potential challengers in political limbo.

A spokesman for Mr. Cuomo did not respond to questions about his future or his standing in the Democratic Party.

With little public polling yet available, it also remains unclear whether early signs that Democratic voters want Mr. Cuomo to resign will harden. Earlier this year, after allegations of groping and sexual harassment by Mr. Cuomo first became public, many Democratic voters expressed reluctance to insist on his resignation, worrying that the party was imposing damaging purity tests on its leaders. Aside from Senator Al Franken of Minnesota, who resigned after being accused of groping and forcibly kissing women, only a handful of prominent Democratic politicians have lost their jobs because of allegations of sexual harassment or assault.

Yet, by initially backing the independent investigation himself, which was spearheaded by two outside investigators, Mr. Cuomo ultimately armed Democrats with well-documented evidence of his alleged misdeeds, creating a process that many Democrats hope will be perceived as fairer by the public.

“With Franken, there was so much pressure for him to resign before there was even a process, and that was wrong,” said Randi Weingarten, president of the American Federation of Teachers, and another longtime Cuomo ally who now believes he should resign. “But there’s a difference between an accusation that should be seriously treated versus a report that basically corroborates the accusations.”

The handicapping of the potential Democratic field to succeed Mr. Cuomo begins with Ms. James, who is viewed by many as the most formidable contender, capable of appealing to both Black voters across the ideological spectrum and white progressives who see her as having held Mr. Cuomo to account.

Ms. James has yet to give any indication that she is planning a run for anything but re-election as attorney general, and she is often described as risk-averse. But the possibility of a vacancy has set off intense speculation about whether she would turn her sights to the governor’s office.

Whatever Ms. James decides, if Mr. Cuomo exits before the end of his term, New York will immediately get its first female governor: Lt. Gov. Kathy Hochul, a former congresswoman from Buffalo, would succeed him, and would very likely seek a full term in 2022.

An official close to Ms. Hochul said her team was already thinking through how to balance bringing the state together and moving forward with what they expect could be a prolonged period of recrimination toward the Cuomo administration. The official also said Ms. Hochul is having conversations about personnel should she assume the governorship. And multiple lawmakers have met with her in recent weeks and gotten the impression that she is preparing for the chief executive position.

Ms. Hochul would enjoy not only the advantages of incumbency in a governor’s race, but also a considerable head start: She has not had a close working relationship with Mr. Cuomo, but that has freed her to spend much of her six-year tenure traipsing across the state, holding economic-development events, championing Democratic candidates and quietly building a statewide network of political donors.

Mr. Sharpton, whose Harlem headquarters is a mandatory way station for Democratic aspirants, said that political associates of Ms. James, Comptroller Thomas P. DiNapoli, Representative Thomas Suozzi of Long Island and Mayor Bill de Blasio had all approached him to sound him out about the 2022 governor’s race.

“It’s going to be very difficult for the governor to stay in, and I think it’s going to open up the primary season early,” Mr. Sharpton said.

Others said to be considering a run include Jumaane D. Williams, the left-wing New York City public advocate, who lost to Ms. Hochul in the 2018 primary for lieutenant governor, and Steven Bellone, the Suffolk County executive.

Mr. de Blasio has declined to rule out a bid. Similarly, a campaign adviser to Mr. DiNapoli, Doug Forand, said Mr. DiNapoli was happy in his current job but acknowledged “the unpredictable nature of the governor’s situation.”

The list of possible Democratic contenders will almost certainly increase, and could include other members of Congress, depending on the results of the redistricting process. It also could include the names of more prominent women: Some in party circles have expressed hope that Senator Kirsten Gillibrand or even Hillary Clinton might become interested in the job.

Celinda Lake, a veteran Democratic pollster, said this was to be expected.

“When something this visible happens,” she said of the Cuomo scandal, “and then it continues to happen after people thought it had been dealt with, it really gives you an appetite for women candidates.”

WASHINGTON (BLOOMBERG, AFP) - Facebook is facing renewed fury from Washington after reports suggested the company knew, but did not disclose, that its … END_OF_DOCUMENT_TOKEN_TO_BE_REPLACED