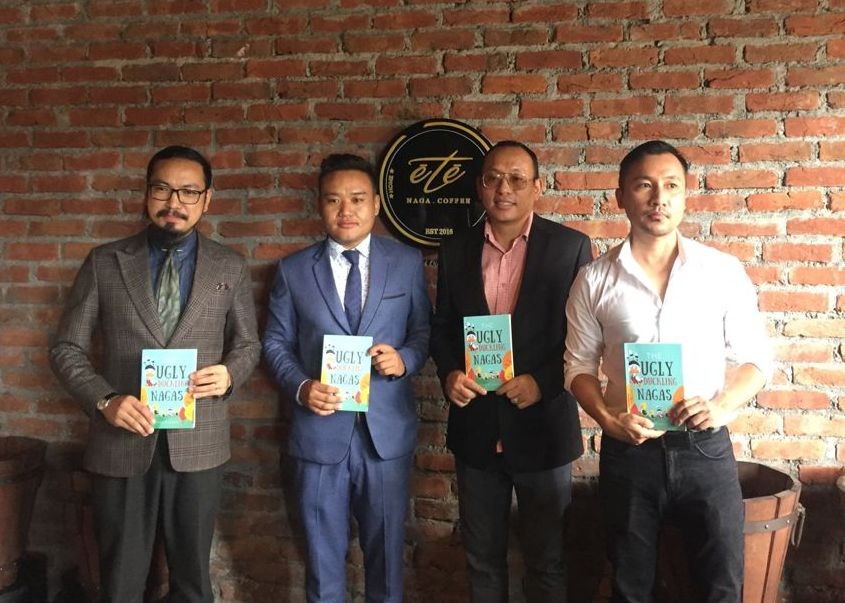 With the intention to inspire unemployed Naga youths to venture into entrepreneurship, 29-year-old Avitho-o Loucii has translated his concerns of unemployment in the state into a book titled “The Ugly Duckling Nagas.”

The book published by Heritage Publishing House was formally released by Rev Shan Kikon, Senior Pastor of Faith Harvest Church, Kohima, at Été Coffee, Billy Graham Road on August 28. Launching the book, Rev Shan Kikon commended the author for choosing a path less travelled and said that it might be challenging but in the end, it will be more rewarding.

Stating hope that so many people will be blessed by his endeavours, he also expressed that as a church, “we have begun to pray that God will raise a generation of creators of development.” He recalled that getting educated and securing a government job had become a desired path for all Naga parents, the formula for which success is very simple- study hard and get a government job.

However, he observed that by the 90s, this formula began to fade even though we are only realising now. “The raw mentality that we have developed in Nagaland is that we assign too much of importance to bureaucracy, technocracy or politics,” he pointed out while expressing that they are not creators of economy but are managers.

Entrepreneurs, he affirmed are the real creators of jobs and economy and stated belief that entrepreneurship is a godly and a beautiful thing. He further commented that the book- The Ugly Duckling Nagas is one of the steps we are taking in the right direction and carries the heart of the author. “That’s the spirit we must all carry and communicate,” he added.

Lichan Humtsoe, Entrepreneur & Proprietor of Été Coffee, in his review said, “The main characters in this book are the Entrepreneurs which the authors refer to as ugly ducklings that transform into swans.” He said the book tries to bring all professions from myriad fields with the main contender being the mindset of the people.

Stating that it addresses the larger issue of unemployment in our state, he said, the crux of the matter is not only about people rushing towards government jobs but is emphatic and mindful of the unemployment issue caused by unhealthy mindset. Pointing to the lack of dignity of labour, he said, the book also addresses the lack of the idea to pursue the vision, our purpose to serve people and God and lack of mission to conquer our fear and ignorance.

Yanpvuo Yanfo Kikon, Entrepreneur & Founder of The Naga Blog, commended the author for bringing out a very important core issue in the society in a very simple and straightforward manner. Commenting that he didn’t take a very sophisticated route where you need a dictionary, he added that the book is very simple and straight to the point.

The examples given in the book, he expressed are relevant to our Naga society and also touched upon “competency.” Stating that the book has been written at the right time, at a very important point in our era, which he describes as a paradigm shift, Kikon added, “there’s more money to be earned in business, and that also, honest money.”

Towards this end, he also said, “we are selling value- money is ultimately a translation of value”. He further complimented the author by saying, “with people like you, there is a new sense of enlightenment and consciousness.”

Avitho-o Loucii, who hails from Zhadima village is a former teacher of Baptist High School, Kohima and did his graduation from Ghousia College of Engineering VTU, Belgaum. He currently works in the construction sector under “Eulogia Constructions.” He is also the Sunday School Teacher of Kids Kingdom Ministry, Faith Harvest Church, Kohima.

WASHINGTON (BLOOMBERG, AFP) - Facebook is facing renewed fury from Washington after reports suggested the company knew, but did not disclose, that its … END_OF_DOCUMENT_TOKEN_TO_BE_REPLACED