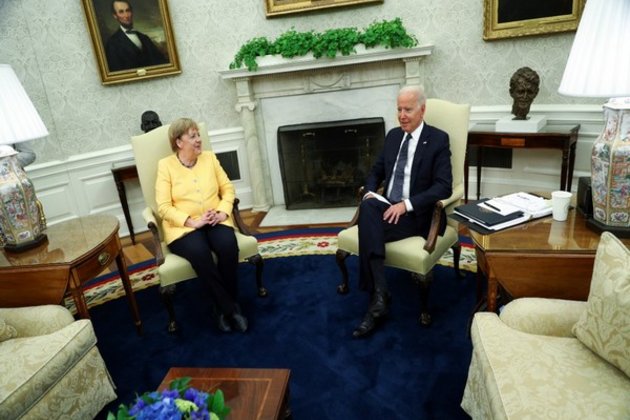 Washington [US], July 16 (ANI): US President Joe Biden and German Chancellor Angela Merkel stressed the importance of standing up for democratic values and human rights in the context of China.

This was spelled out during a meeting between Biden and Merkel at White House. Merkel said she and Biden discussed both “competition” and “cooperation” with China, The Hill reported.

“We are countries who stand up for free, democratic societies,” Merkel said. “Wherever human rights are not guaranteed, we will make our voices heard.”Meanwhile, Biden said: “We will stand up for democratic principles and universal rights when we see China or any other country working to undermine free and open societies… we are united in our commitment to addressing democratic backsliding, corruption, phoney populism.”According to New York Times, the two leaders had a 50-minute meeting at the White House and the two leaders discussed several of the most pressing geopolitical priorities, including restraining Chinese influence, curbing Russian aggression and waiving intellectual property restrictions on coronavirus vaccine manufacturers.

In a news conference in the East Room after the meeting, Biden said he raised the contentious issue of the USD 11 billion Nord Stream 2 pipeline, a natural gas conduit being built between Germany and Russia, a project that Biden and his predecessors have assailed as little more than a coercive tool against Ukraine and other allies.

“Good friends can disagree,” he said of the project.

Biden and Merkel announced the formation of a US-German Futures Forum and economic dialogue intended to guide the two countries forward on issues like technology, democratic principles and global partnerships with groups like the European Union and NATO.

“Since the end of World War II, countless people from all walks of life — including business and science, civilian and in uniform, civil society organizations, think tanks and academic networks — have strengthened and deepened the bond between our two nations,” the two leaders said in a joint declaration.

The two allies will also launch a joint climate partnership with a focus on achieving net-zero greenhouse gas emissions in their respective economies no later than 2050.

The initiative will be led on the U.S. side by special envoy for climate John Kerry and Energy Secretary Jennifer Granholm. (ANI)

(The Center Square) – A federal judge has ruled Union City farmer Robert Holman’s lawsuit against the U.S. Department of Agriculture over COVID-19 … END_OF_DOCUMENT_TOKEN_TO_BE_REPLACED