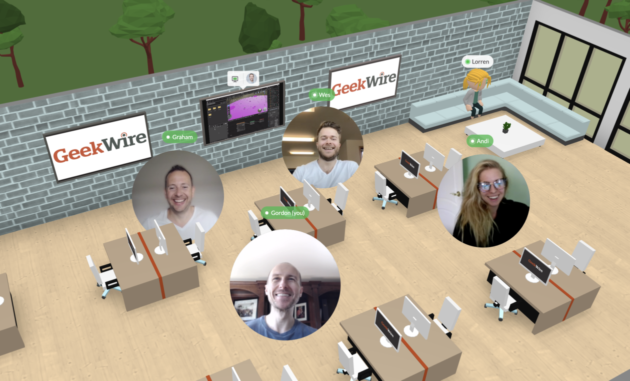 The tech giant is hoping to ride pandemic-driven tailwinds that have sparked remote work and adoption of VR, particularly for Facebook’s Oculus subsidiary.

Horizon Workrooms works both across virtual reality and the web, and uses features such as digital whiteboards, hand tracking, spatial audio, and more to help colleagues work together, even if they are physically apart. Other companies including Microsoft have unveiled similar experiences recently.

Horizon Workrooms is now open for collaboration, built for teams to feel like they’re together despite being apart. The tools we currently have serve people to a certain degree, but we’ve lost the ability to be creative and connected, a gap we believe Workrooms can bridge. pic.twitter.com/TOSyiinKOl

It’s not yet clear if Facebook’s new idea will catch on. The reaction on Thursday ranged from “I like it in here” to “this looks like hell.”

“It further validates the potential of spatial computing for work and collaboration,” said Forest Gibson, co-founder of Pluto, a Seattle startup that develops mixed reality services. “It will cause more people to experiment with virtual workspaces and consider using them as a key part of their remote or hybrid teams.”

Gordon Hempton, CEO and co-founder of Spot, recently raised $1.7 million for his company’s software that creates a virtual representation of an office. He said Horizon Workrooms is “definitely validating.”

“It’s all part of the same narrative,” said Hempton, who previously helped launch Seattle sales giant Outreach. “We are seeing companies who are really leaning into remote work realizing that they need an extra layer of depth to the experience.”

An example of a virtual GeekWire office built with Spot. (Spot Photo)

Hempton said Spot is focusing on a more accessible virtual experience that doesn’t require a VR headset. But he said over time, “VR will become a progressive enhancement to Spot that will ultimately compete with things like Horizon Workrooms.”

There have been previous attempts at combining virtual reality with work. Back in 2014, a Seattle startup called Envelop launched a unique product that allowed employees to strap on a headset and work in a virtual environment, with a virtual Windows desktop and access to infinite monitors in a 3D space.

But Envelop shut down in 2017. Its CEO, Bob Berry, said there wasn’t a big enough market.

“We just recognized that our strategy and timing and all of that were probably two or three years away to be able to execute our big strategy,” Berry said in 2017. “With these venture-backed type of companies, you have to be in the right place at the right time. I think we were way early.”

Other Seattle-based VR startups which raised venture capital such as Pixvana and Vreal also closed in recent years. 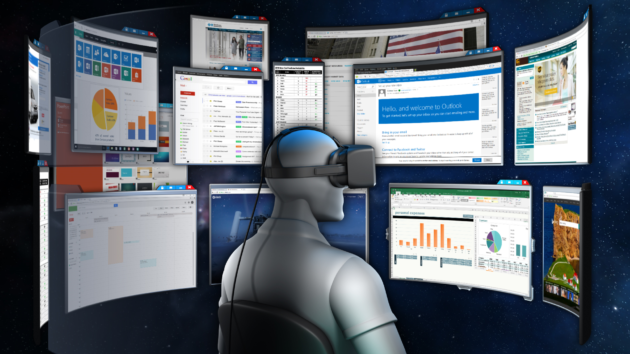 Envelop for Windows let users work in a virtual environment with infinite monitors in a 3D space. The company shut down in 2017. (Envelop Image)

Virtual and augmented reality still have yet to hit the mainstream after years of hype, largely due to expensive hardware and lack of use cases. But Oculus was able to lower the price to $299 for its Quest 2, which is a standalone headset and does not require an attached PC. And other giants including Apple and Microsoft continue to invest in the sector.

“The commercial use cases for virtual reality continue to proliferate,” Tom Mainelli, group vice president, Device & Consumer Research at IDC, said in a statement. “As companies continue to plan for a future that encompasses a combination of both in-person and remote work, we see VR playing an increasingly important role in driving next-generation collaboration, training, and digital events.”

Facebook is clearly still betting on the technology with experiments such as Workrooms and Horizon itself, which is a virtual playground of sorts similar to Rec Room, another Seattle-based VR company that raised $100 million earlier this year. Oculus also acquired Seattle VR gaming startup BigBoxVR, the developers behind Population: One.

It’s all part of the “metaverse” that Facebook CEO Mark Zuckerberg described earlier this month as a “virtual environment where you can be present with people in digital spaces.”

How this so-called “metaverse” evolves, which companies participate, and what types of new opportunities — or problems — arise remains to be seen. Gibson noted that Facebook did not announce other supported platforms for Workrooms and “appears to be continuing their focus on building out their own closed Quest platform.”

“At Pluto, we believe that an open ecosystem where developers can create and publish multi-tasking apps on a variety of hardware without needing app store approval will be essential for the success of the next computing platform,” he said.

WASHINGTON (BLOOMBERG, AFP) - Facebook is facing renewed fury from Washington after reports suggested the company knew, but did not disclose, that its … END_OF_DOCUMENT_TOKEN_TO_BE_REPLACED