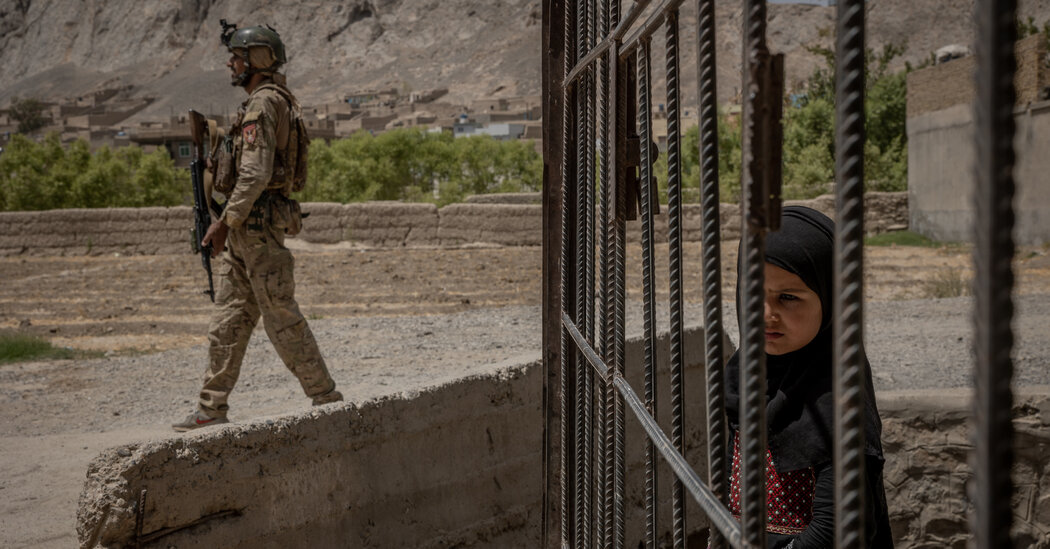 As the Afghan government lost control of more than a dozen cities in a matter of days, Biden administration officials repeatedly urged its collapsing security forces to demonstrate “leadership” and “will” to defend Kabul, their capital — underscoring the stark reality that the United States has no intention of rescuing them as the Taliban storm across the country.

Echoing several other top U.S. officials in recent days, John F. Kirby, a Defense Department spokesman, noted to reporters on Friday that Afghan government forces had numerical and firepower advantages over the Taliban and suggested they should be able to stop the onslaught if only they tried hard enough.

“We will do what we can from the air, but they have the advantage. They have greater numbers. They have an air force. They have modern weaponry,” he said. “It’s time now to use those advantages.”

A day earlier, Mr. Kirby was more explicit. “No potential outcome has to be inevitable, including the fall of Kabul,” he said. “It doesn’t have to be that way. It really depends on the kind of political and military leadership that the Afghans can muster to turn this around.”

President Biden has spoken in similar terms, saying on Tuesday that Afghan forces “have got to want to fight.” The next day, Jen Psaki, the White House press secretary, said the Afghans “have what they need,” but must determine whether they have “the political will to fight back.”

But Afghan forces are suffering from shattered morale, diminishing supplies, and the shock of a war they are losing much faster than all but the most pessimistic analysts expected.

And privately, many U.S. officials are growing increasingly doubtful that the Afghan forces can rally to mount a defense of Kabul, which could potentially force a stalemate and an eventual political settlement.

That attitude is reflected by the increasingly frantic preparations underway for the worst-case scenario of a Taliban takeover of the capital city.

U.S. officials on Thursday announced the deployment of 3,000 troops to begin evacuating Americans from Kabul, and are accelerating plans to relocate Afghans who worked with U.S. military forces, and who may be eligible for Special Immigrant Visas to resettle in the United States. Some 20,000 Afghans have applied for the visas, which take months to process, leaving them vulnerable to potential Taliban reprisals while they wait. Many live in Kabul.

People familiar with the planning say that State Department officials have been working virtually around the clock to expedite what U.S. officials have called Operation Allies Refuge.

Nearly 700 Afghans have landed in the Washington area on four flights so far, with most moving on to Fort Lee in Virginia. About 1,750 more are expected to arrive at Fort Lee over the next 10 days, according to the sources familiar with the planning.

The State Department said this month that thousands of Afghans with American ties who did not qualify for the Special Immigrant Visa program, including people who worked for U.S.-based media organizations and nongovernmental organizations, would be eligible for priority refugee status.

But those Afghans must apply for refugee status from outside of Afghanistan — a prospect that has become far more daunting as the Taliban seize control of more territory, roads and border crossings, making it dangerous to try to leave the country. Many of Afghanistan’s neighbors have also turned back refugees fleeing the Taliban advances.

Refugee advocates and former U.S. officials who have worked in Afghanistan said they had been inundated with messages from panicking Afghans with Western ties looking for assistance in fleeing the country. The Taliban have been accused of massacring their political enemies after their battlefield victories.

In another sign of alarm, Politico reported that the staff at the U.S. Embassy in Kabul had been instructed to begin burning documents. A State Department spokesman did not deny the report but said, without discussing specifics, that the embassy was following the standard operating procedure for diplomatic posts worldwide that are ordered to shrink their footprint.

But the spokesman did say that Secretary of State Antony J. Blinken had not urged Afghanistan’s president, Ashraf Ghani, to resign during a Thursday phone call that Secretary of Defense Lloyd J. Austin III had also joined.

The Taliban have made Mr. Ghani’s resignation one of their key demands at peace talks with Afghan government officials that began in 2019, and have thus far proved fruitless.

White House officials said on Friday that Mr. Biden’s national security team had briefed him on conditions in the country.

But while the White House has maintained an external sense of calm, officials are keenly aware of the growing sense of political danger for Mr. Biden as cable news networks devote more airtime to the Taliban surge and an increasingly chaotic American exit.

Senator Mitch McConnell, Republican of Kentucky and the minority leader, after a conversation with Afghanistan’s ambassador to the United States, Adela Raz, issued a statement on Friday urging the Biden administration to “hammer Taliban advances with airstrikes” and provide “critical support” to Afghan security forces to prevent the fall of Kabul.

The United States has conducted strikes against the Taliban this summer even as American troops make a final withdrawal from the country, but they have proved largely ineffectual.

On Twitter, Ronald Klain, the White House chief of staff, retweeted several posts from others defending Mr. Biden’s decision to withdraw troops from the country, including one that cited poll numbers showing strong public support for an exit from the country.

Biden spokespeople have also fended off increasingly painful questions about what might be in store in the coming days and weeks.

On Friday, Mr. Kirby declined to discuss whether the United States might be confronting a repeat of the fall of the South Vietnamese capital of Saigon in April of 1975, a moment that marked the final failure of the American project in the Vietnam War.

“We’re not focused on the history of the Vietnam War. We’re just not,” Mr. Kirby said. “We’re focused on meeting the requirements we have today.”

Mr. Biden addressed the same question in July, while taking questions from reporters at the White House.

“There’s going to be no circumstance where you see people being lifted off the roof of an embassy of the United States from Afghanistan,” he said. “It is not at all comparable.”

WASHINGTON (BLOOMBERG, AFP) - Facebook is facing renewed fury from Washington after reports suggested the company knew, but did not disclose, that its … END_OF_DOCUMENT_TOKEN_TO_BE_REPLACED