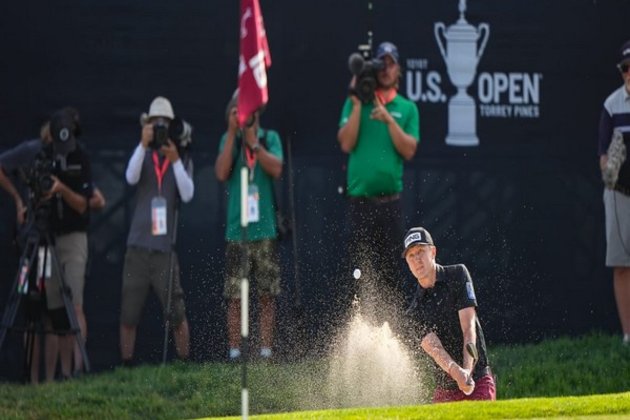 San Diego [USA], June 20 (ANI): Get ready for a wild Sunday at Torrey Pines. If the final round of the 121st U.S. Open Championship is anything like that seen on Saturday, it could the same kind of theatrics produced the last time this championship visited the South Course in 2008.

Tiger Woods won’t be the central figure this time around, but the storylines are plenty intriguing. Three players with varying professional success share the 54-hole lead at 5-under-par 208.

There’s Mackenzie Hughes, a 30-year-old Canadian who missed the cut in his three previous U.S. Open starts. Hughes, who has one PGA Tour win (the 2016 RSM Classic), converted a 63-foot eagle putt on the par-5 13th and closed with an up-and-down birdie from a greenside bunker on the par-5 18th for a 3-under-par 68.

There’s Russell Henley, the 32-year-old Georgia native who barely broke 80 in his only tour around the South Course prior to this week. The 18- and 36-hole leader holed out a 65-foot bunker shot on No. 11, statistically the hardest hole on the course, for a birdie en route to an even-par 71.

And there’s the 2010 winner of The Open Championship at St. Andrews, Louis Oosthuizen, who always seems to be around the leader board in major championships. The 38-year-old South African has been a runner-up in all four majors: the 2015 U.S. Open, 2012 Masters the 2015 Open Championship at St. Andrews (in a playoff), and the 2017 and 2021 PGA Championships. On Saturday, he rolled in a 51-foot eagle putt on the closing hole for a 1-under 70 and a spot in Sunday’s final pairing with Hughes at 12:55 p.m. PDT.

But that trio can’t get too comfortable, especially with two stalwarts lurking two strokes back. Defending champion Bryson DeChambeau, who carded a bogey-free 68 on Saturday, and 2011 winner Rory McIlroy (67) are no strangers to Sunday pressure in a major. McIlroy also owns a pair of PGA titles and a British Open title, while DeChambeau rallied from two shots back last September to win by six.

Three shots back are Jon Rahm, whose first PGA Tour win in 2017 came at Torrey Pines, 22-year-old Matthew Wolff, the runner-up last September at Winged Foot, and Scottie Scheffler, the 2013 U.S. Junior Amateur champion who is still seeking his first win on the PGA Tour.

Because it’s a U.S. Open, never count out the likes of 2016 U.S. Open champion Dustin Johnson, 2020 PGA champion Collin Morikawa and local favorite Xander Schauffele, all of whom are four behind.

“I feel like I’m starting to understand major championship golf and how to play it and how to go about managing my game, my attitude, and just my patience level,” DeChambeau said in an official release by US Open Championship. “If I can continue to do that tomorrow, I think I’ll have a good chance.”While nobody is surprised to see Oosthuizen in this position, Hughes came into the week having missed his last five cuts on the PGA Tour and was without a top 10 in a stroke-play event since a tie for seventh in the Vivent Houston Open last November.

“I don’t think I’m ever surprised when I play well,” said the former Kent State standout who is bidding to become the first Canadian to win the U.S. Open. “I wouldn’t say I necessarily expected to be in the last group this week, but I know that my game is good enough to win on the PGA Tour. I’ve done it before. This is a bigger stage, but again… it’s an 18-hole golf course and 72 holes, so I just need to do a lot of the same things I did to win that tournament.”Oosthuizen, who started Round 3 behind Henley and 48-year-old Richard Bland, got off to an indifferent start on Saturday, making the turn at 1-over 36. Another bogey at No. 10 pushed him three strokes out of the lead and seemingly out of the conversation. Then he rolled in a 30-foot birdie putt on the par-3 16th and the monster eagle putt at 18.

“Look, it will help a bit, but I need to play well,” said Oosthuizen, responding to his wealth of major-championship experience. “There’s a lot of great players who have a chance of winning this, and I just need to go out and play as good as I can tomorrow.”Four years ago, Henley entered the final round of the U.S. Open at Erin Hills in a share of seventh, only to falter on Sunday with a 79. Now in his eighth U.S. Open, Henley, who shared low-amateur honors in 2010 at Pebble Beach, hopes that experience will pay dividends.

He showed some mental fortitude down the stretch on Saturday with a brilliant up-and-down save for par from a greenside bunker on his final hole.

“Tied for the lead going into the last day of a major, you never know,” said Henley, whose last win was the 2017 Honda Classic. “I’m 32, I don’t know how many more good years I have left, but hopefully a lot. I’m just excited. You always wonder what it would feel like to be in contention.” On Sunday, he’ll get that chance.

With an odd number of golfers making the cut (71), four-time U.S. Open competitor Jason Gore, the USGA’s senior director of player relations, played as a non-competitive marker with Akshay Bhatia. Outgoing USGA CEO Mike Davis served as Gore’s caddie. Gore, who grew up in Valencia, Calif., qualified for the 2008 U.S. Open at Torrey Pines but missed the cut.

Holes 10-12 have been three of the four toughest all week, and the par-5 13th is playing slightly over par (5.07). Mackenzie Hughes is 6 under on that stretch.

WASHINGTON (BLOOMBERG, AFP) - Facebook is facing renewed fury from Washington after reports suggested the company knew, but did not disclose, that its … END_OF_DOCUMENT_TOKEN_TO_BE_REPLACED