Thousands of Southern Baptists from across the US are heading to Tennessee this week to vote for their next president, a choice laced with tension that could push America’s largest evangelical Christian denomination even further to the right and potentially spark an exodus of Black pastors and congregations.

Each of the three leading candidates for president presents a unique vision for the Southern Baptist Convention (SBC) and will help guide the Protestant denomination through the thorny issues it currently faces – declining membership, deep divisions over acknowledging the existence of systemic racism and fresh accusations of mishandling sexual abuse allegations.

The denomination, which is more socially conservative than the general American public on issues such as abortion and LGBTQ+ rights, would become even more politically aligned with Republican party if it were to elect the Georgia pastor Mike Stone as its next president. On the other side, the Alabama pastor Ed Litton has called for more distance from politics, and has the support of prominent Black Southern Baptists, who are part of a minority group that has been crucial in shoring up the SBC’s dwindling membership. Landing somewhere between Litton and Stone is the seminary president Albert Mohler, a former “Never Trumper” who endorsed Donald Trump’s 2020 election campaign.

Barry Hankins, a historian at Baylor University who studies evangelicalism, said that the SBC seems to be going through an “identity crisis”.

“There is a strong faction that wants to be in lock step with the culture wars of the Republican party and a smaller group that wants to maintain a more independent witness within American culture,” he said.

Southern Baptist messengers, who represent their churches at the meeting, can only vote for the next president by being physically present on the convention floor. After last year’s meeting was cancelled due to the coronavirus pandemic, more than 16,000 people plan to attend the 15-16 June conference at Nashville’s Music City Center, which would make the event the SBC’s biggest annual meeting in 25 years.

The Southern Baptist Convention was formed in 1845 by pro-slavery Baptists in the south who believed it was moral for missionaries to own slaves. Despite this history, SBC missionary efforts since the 1950s have seen the number of Black churches in the denomination slowly increase, with a growth spurt after 1995, when the denomination apologized for condoning slavery and systemic racism.

JD Greear, president of the Southern Baptist Convention, is seen on a video screen as he addresses a congregation in Birmingham, Alabama, in 2019. Photograph: Jay Reeves/AP

Jéan Ward, a 49-year-old Black Southern Baptist pastor and church planter from Atlanta, first joined the SBC about 10 years ago, attracted by its commitment to evangelization in urban areas. He told the Guardian that other church planting networks he had worked with didn’t give him the resources and autonomy he needed to start a successful church plant in the Atlanta communities he was seeking to reach.

“I love the fact that within the Southern Baptist Convention, when it comes to mission, they hands down the work together with that, even though there are some variances that happen,” Ward said.

However, the tensions emerging at the upcoming annual meeting suggest that some white Southern Baptists believe that acknowledging these new members’ views and life experiences threatens the SBC’s dominant culture – which is still overwhelmingly white and conservative.

As white evangelical Protestants become increasingly tied to the Republican party, they have come to expect their churches to align with their political ideology. One of the issues that has been seized on by prominent conservative commentators and politicians – and will probably be a key issue for many of the messengers flocking to Nashville – is critical race theory (CRT), a lens through which scholars seek to understand how systemic racism persists despite the legal victories of the civil rights era.

Donald Trump lashed out at CRT in a memo last September, ordering federal agencies to end racial sensitivity trainings that address topics like white privilege. (Joe Biden rescinded that ban shortly after taking office.) More than 20 states have recently introduced or passed legislation to ban the teaching of CRT in public schools.

At the last annual meeting, Southern Baptists addressed the theory by passing a resolution, a non-binding statement that acts as a powerful symbol.

The statement on CRT, known as Resolution 9, affirmed that Southern Baptists seeking to address social ills don’t need to turn to anything but the Bible for guidance. At the same time, it stated that CRT can be a useful tool with which to analyze human experiences.

The resolution acknowledging CRT’s usefulness prompted a backlash. Stone, the Georgia pastor running for president, has the endorsement of the Conservative Baptist Network, a group formed last year in response to concerns that the SBC is caving to “worldly ideologies” such as CRT.

Stone has proposed a resolution for the annual meeting that unequivocally condemns CRT, calling the framework “neo-Marxist” and “incompatible with scripture”. He said earlier this year: “Our Lord isn’t woke.”

Ward believes the rejection of CRT discounts the lived experiences of Black Americans who have had to work harder to achieve the same successes as their white cohorts. CRT isn’t creating new divisions, but pointing out those that already exist, the pastor said.

Ward, who is also the executive director of the African American Fellowship for the Georgia Baptist Convention, said an anti-CRT resolution could threaten the SBC’s recent success in recruiting existing Black churches into the fold and planting new churches in Black communities. Several prominent Black pastors have recently disaffiliated from the denomination over the issue. While Ward isn’t planning to leave if an anti-CRT resolution passes, he said a few Black pastors in Georgia are talking about doing just that.

An anti-CRT resolution would mark “the beginning of the end of the SBC”, Ward warned. He also suggested that it could have repercussions outside the denomination.

“I honestly believe this is a political move so that critical race theory can be killed on a national level,” Ward said. “If churches are saying CRT is ungodly and shouldn’t be adhered to, that then affects decision makers that lead corporations, who will then push it that way.”

Mohler, president of Kentucky’s Southern Baptist Theological Seminary, has shown a willingness to acknowledge historical racism, commissioning a report in 2018 documenting his seminary’s past ties to white supremacy and slavery. But the report didn’t include plans to rectify or collectively repent for the seminary’s racist past. Mohler has also spoken out against CRT, initiating a joint statement with five other SBC presidents last November that prohibited professors from teaching students about the theory. That statement from the seminary presidents – who are all white – drew heavy criticism from several Black Southern Baptist leaders.

Litton, however, signed a statement last December acknowledging that systemic injustice is real and urging “collective repentance”. He has the support of Fred Luter, the SBC’s first and only Black president.

Ed Stetzer, a Southern Baptist and the executive director of Wheaton College’s Billy Graham Center, said he was hopeful that Southern Baptists would listen to the concerns of Black leaders at the annual meeting. Failing to do so could have serious consequences, he said.

“I think if the SBC comes out with a resolution or a president seen as not listening to the concerns of African Americans, you may see a significant exodus of them from the convention,” Stetzer said.

CRT is not the only issue likely to be debated at the convention. In May, another prominent figure in the denomination, Bible teacher Beth Moore, announced that she no longer considered herself Southern Baptist. For years, Moore had been calling out misogyny within SBC circles and advocating for survivors of sexual abuse. She has also faced backlash from fellow Baptists for preaching to mixed audiences of men and women.

While Southern Baptists affirm that women have key roles to play in the church, the denomination’s core doctrinal statement insists that the Bible does not allow women to serve as pastors. The ban on female pastors was added in 2000, with Mohler’s support. This position was recently challenged by one of the largest SBC churches, California’s Saddleback Church, which ordained three women as staff pastors in May. 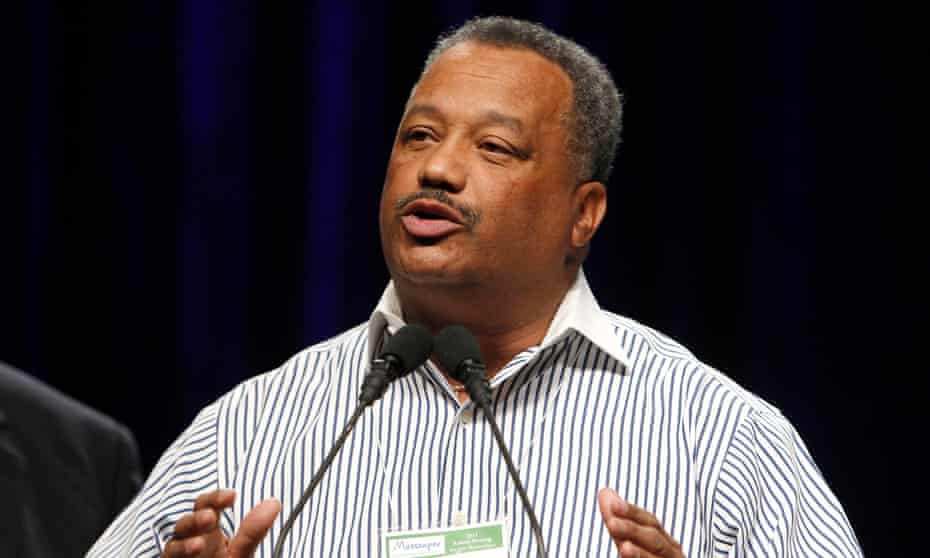 Fred Luter, the SBC’s first and only Black president, has endorsed the Alabama pastor Ed Litton for the next president. Photograph: Ross D Franklin/AP

Mohler, Stone and Litton all agree that the ordination of female pastors contradicts core Southern Baptist doctrine. Mohler even claimed women pastors are the reason for declining membership of liberal churches.

“Liberal theology is the kiss of death for any church or denomination,” Mohler told Religion News Service in May. “Little remains but social justice activism and deferred maintenance.”

Whether or not Saddleback will be disfellowshipped from the SBC for ordaining women remains up to messengers to the annual meeting, Mohler added.

The problem of clerical sexual abuse and cover-up within the denomination has toppled several prominent leaders. In 2019, the Houston Chronicle documented hundreds of credible accusations against SBC pastors, Sunday school teachers, deacons, and church volunteers – some of whom eventually found jobs at different churches.

Calls for accountability emerged again this year after letters written by Russell Moore, former head of the SBC’s public policy arm, were leaked online. (Russell Moore and Beth Moore are not related.)

One letter suggested that the SBC’s executive committee, which runs the business of the convention, had resisted reforms and bullied an abuse survivor. Russell Moore specifically called out Stone, the committee’s chairman at the time, for delaying reforms in a closed-door meeting in May 2019. Russell Moore resigned from his position at the denomination’s public policy arm in May and appears to have left the SBC altogether.

Stone, who says he is a survivor of sexual abuse himself, has called Moore’s accusations “slanderous”, “ungodly” and “outrageous”. On Thursday, leaked audio recordings from that meeting appeared to corroborate Russell Moore’s accusation that executive committee leaders prioritized the denomination’s image over abuse survivors’ concerns. In response to the leaks, the executive committee announced it had hired a firm to perform an independent review of its handling of sexual abuse issues. Some survivors are still concerned about whether the investigation will be truly independent from the executive committee’s control. 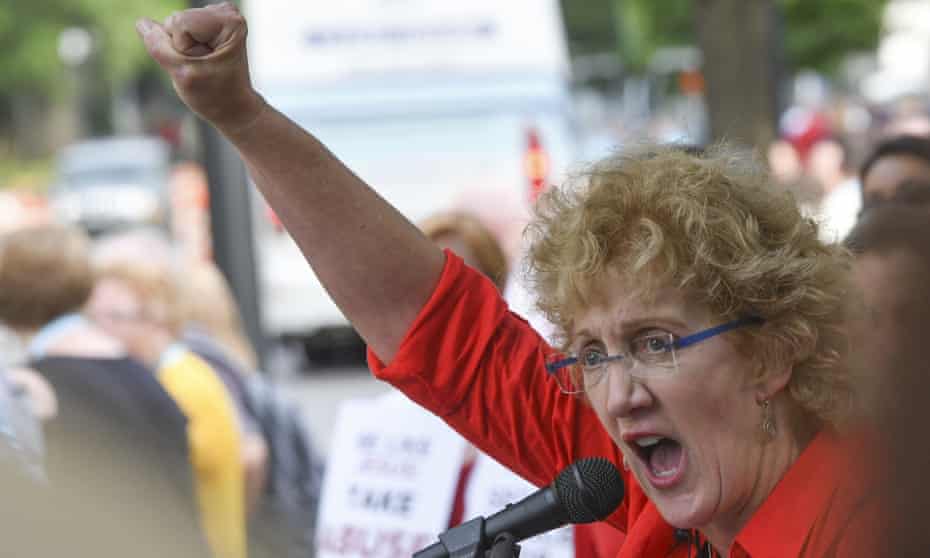 Christa Brown speaks during a rally in Birmingham, Alabama, outside the Southern Baptist Convention’s annual meeting in 2019. Photograph: Julie Bennett/AP

Christa Brown, a longtime advocate for abuse survivors in Baptist circles, said she did not have faith in the SBC’s ability to address the issue.

“The juxtaposition of nice-sounding talk with a lack of any care or action feels duplicitous and lessens any possibility of trust,” Brown said. “It is yet another way of being re-victimized and exploited.”

In a statement, Ronnie Floyd, the committee’s current president, said: “The Convention was – and still is – divided over methods of response to sexual abuse. However, the SBC is not divided on the priority of caring for abuse survivors and protecting the vulnerable in our churches.”

Stetzer believes the election, resolutions and motions that emerge from this year’s annual meeting will determine the SBC’s future. He said it was important for Southern Baptists to wade through these tough issues of race and abuse before concentrating on the church’s ultimate mission – evangelism.

“You have to deal with the bad before you can get to the things we want to focus on,” he said. “We have to address issues of abuse and poor leadership and simultaneously choose a path that enables us to hear out concerns about CRT while listening to the voices of African American leaders.”

WASHINGTON (BLOOMBERG, AFP) - Facebook is facing renewed fury from Washington after reports suggested the company knew, but did not disclose, that its … END_OF_DOCUMENT_TOKEN_TO_BE_REPLACED