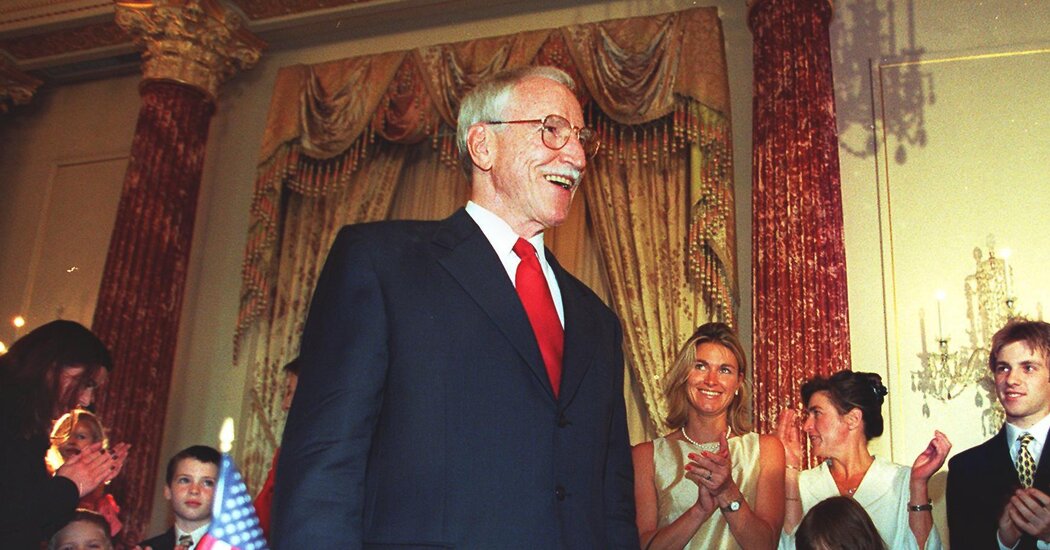 James C. Hormel, the first openly gay person to represent the United States as an ambassador, died on Friday in San Francisco. He was 88.

His death, at the California Pacific Medical Center, was confirmed by a family spokesman. His son, Jimmy, said Mr. Hormel had been in the hospital for two weeks.

Mr. Hormel, a philanthropist and the grandson of the founder of Hormel Foods, served as ambassador to Luxembourg under President Bill Clinton. But his nomination process was met with public opposition, spearheaded by conservative Republicans who portrayed Mr. Hormel as a sinner and equated being gay to having an addiction or being a kleptomaniac.

Mr. Clinton first nominated Mr. Hormel for the post in 1997. By then, Mr. Hormel had been openly gay for three decades. He also had an impressive record of accomplishments.

As dean of the University of Chicago Law School from 1961 to 1967, he established the James C. Hormel Public Service Program to encourage law students to go into public service. In the early 1990s, he was an alternate representative of the U.S. delegation to the 51st United Nations General Assembly, the founding director of the City Club of San Francisco and a director of the San Francisco Chamber of Commerce.

In 1997, Mr. Hormel was also the chairman of Equidex, a San Francisco-based company that manages the Hormel family’s philanthropical endeavors and investments, a position he would continue to hold for years. He was long active in the Democratic Party as a donor and served on the board of the foundation of the Human Rights Campaign, the nation’s largest gay and lesbian organization.

But his nomination was an issue for the Republican senators James Inhofe of Oklahoma, Tim Hutchinson of Arkansas and Robert Smith of New Hampshire, who raised 11th-hour objections as the Senate was pushing to confirm nominees in the session’s final days that year. The Senate majority leader, Trent Lott of Missouri, ultimately blocked the Senate from voting on the nomination.

The senators cited Mr. Hormel’s political views and his gay rights activism as reasons to oppose his nomination. “Our concern is about this nominee’s political views,” Gary Hoitsma, a spokesman for Mr. Inhofe, said. “He’s been an outspoken promoter of things like same-sex marriages, things we don’t agree with.”

Mr. Hormel, undeterred, met with each of his skeptics one on one, challenging their opposition. It is unclear whether these conversations had any effect, but Mr. Hormel was finally appointed to the ambassadorship in 1999, when Mr. Clinton bypassed the normal confirmation process and named him while Congress was in recess. Mr. Hormel served as ambassador until December 2000.

“He was a man of immense integrity and dignity,” his son said. “He was always proud about being the person he was, and he never tried to change who he was.”

James Catherwood Hormel was born on Jan. 1, 1933, in Austin, Minn., the youngest son of Jay and Germaine (Dubois) Hormel and the grandson of George A. Hormel, Hormel Foods’ founder. He grew up in Austin, where much of the town worked for the Hormel meatpacking plant run by his father.

Mr. Hormel received a bachelor’s degree in history in 1955 from Swarthmore College in Pennsylvania, where he met his future wife, Alice McElroy Parker. They married that year and divorced in 1965.

After graduating from Swarthmore, Mr. Hormel received a law degree from the University of Chicago. He eventually returned to Swarthmore to become a member of the college’s board of managers. He met Michael P.N. Araque in 2008, when Mr. Araque was a sophomore there. They married in 2014.

For over three decades, Mr. Hormel worked at providing resources to organizations serving people affected by H.I.V. and AIDS or dealing with substance abuse and breast cancer.

Michael Hormel, his husband, said that Mr. Hormel had a “lovely, very sweet but full, round singing voice” and that they were both “fierce advocates of the arts,” supporting the San Francisco Symphony and other arts organizations. He added that Mr. Hormel had liked simple pleasures, like dark chocolate and an orange twist in his gin.

Mr. Hormel received a variety of awards for his philanthropy, including the Silver Spur Award for Civic Leadership from the San Francisco Planning and Urban Research Association and a lifetime achievement award from the Human Rights Campaign. He also received honorary doctorates from Swarthmore, Hamline University in Minnesota and the California Institute of Integral Studies.

In addition to his husband, who worked with him in his philanthropic and charitable work, Mr. Hormel is survived by five children, Alison, Anne, Elizabeth, Jimmy and Sarah; 14 grandchildren; and seven great-grandchildren.

During Mr. Hormel’s time in the hospital, his husband said, he reflected on how Mr. Hormel’s passion for advocacy had made it possible for him to be recognized as his spouse and allowed them to spend the last hours of James’s life together.

“If not for his resolve to make the world a fairer and more just place,” Michael Hormel said, “I’m not sure even hospitals would have been so receptive to my being there.”

WASHINGTON (BLOOMBERG, AFP) - Facebook is facing renewed fury from Washington after reports suggested the company knew, but did not disclose, that its … END_OF_DOCUMENT_TOKEN_TO_BE_REPLACED