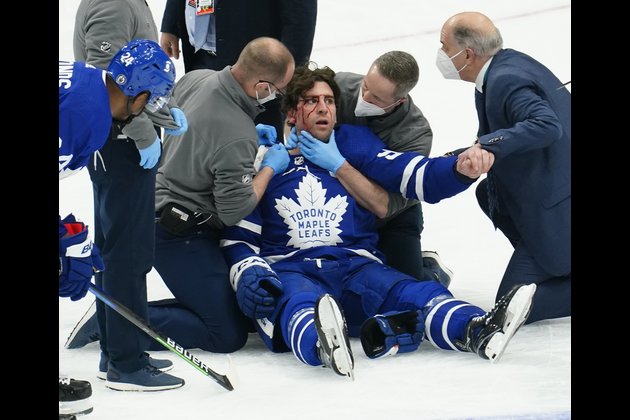 Paul Byron’s short-handed goal in the third period gave the Montreal Canadiens a 2-1 victory over the host Toronto Maple Leafs on Thursday in Game 1 of their first-round North Division playoff series.

Toronto captain John Tavares left the game with an apparent head/neck injury in the first period after being kneed in the head by Corey Perry. Tavares gave a thumbs-up gesture as he was stretchered off the ice, following several minutes of treatment from both teams’ trainers. He was taken to a local hospital, where he was to stay overnight.

Ryan Lomberg scored on a breakaway with 14:04 left in overtime, leading Florida to a win at Tampa Bay in their Central Division first-round playoff series.

The Panthers won despite Tampa Bay’s five-goal barrage in the second period and trailing by two entering the third. The Lightning lead the best-of-seven series 2-1.

Brandon Tanev scored with 3:36 left as Pittsburgh outlasted New York in a wild Game 3 of an Eastern Conference first-round series in Uniondale, N.Y. The Penguins lead the best-of-seven series two games to one.

Kris Letang scored in the first, and Jeff Carter and Jason Zucker scored fewer than five minutes apart late in the second to stake the Penguins to a 3-1 lead following a goal by the Islanders’ Scott Mayfield.

Cal Clutterbuck and Anthony Beauvillier scored 2:08 apart early in the third to tie the game for New York. Carter scored his second goal of the game at the 7:00 mark, but Clutterbuck created a 4-4 tie when he tallied his second of the night at 14:17.

(The Center Square) – A federal judge has ruled Union City farmer Robert Holman’s lawsuit against the U.S. Department of Agriculture over COVID-19 … END_OF_DOCUMENT_TOKEN_TO_BE_REPLACED