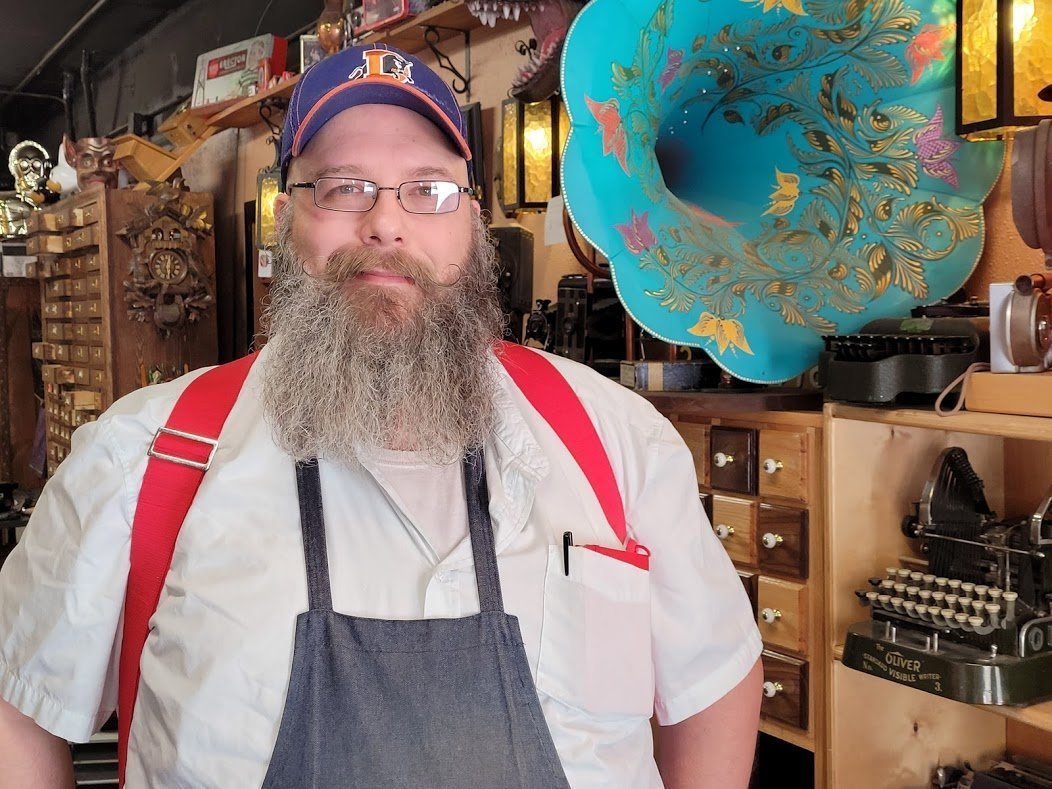 He has one employee, Newell Robinson. They repair cell phones and tablets. They also serve as a Fieldprint station, doing fingerprints for background checks.

Mr. Moustache also had another shop in Saginaw, which was earlier located in Freeland. He ended up closing that shop during COVID-19.

Watters is a graduate of Saginaw Arthur Hill High School. He became certified in massage therapy in a program sponsored by Ferris State. He said he’s always worked with his hands.

Watters and his wife, Raeann, live in Bay City with their three sons. Raeann is a medical lab scientist with McLaren in Bay City.

1. How long have you owned your business?

2. What inspired you to own this business?

I was disappointed with how Verizon took care of their customers when I worked for them, when customers came in with a problem. If you weren’t eligible for an upgrade or you didn’t have a warranty, it could cost you several hundred dollars. So, I decided into making a go of it with this type of business. I saw a hole in the market and decided to fill it.

3. What makes Midland a great place to own a business?

Downtown Midland has been incredibly welcoming. They have a lot of programs people don’t know about. The first 18 months, they’ll pay a portion of your rent to help you get started and help pay for façade work. I found that really inviting.

Downtown is just adorable. I moved in before the major street reconstruction. I like the neighborhood feel. I loved Freeland, being in front of Pat’s, but I didn’t feel like I knew the businesses around me there.

4. What are some ways your business is active in the local community?

I was president of the MDBA (Midland Downtown Business Association) for a couple of years, was also on the board. We try to participate in events when we can: Meet Your Merchants, Putt-Putt Golf.

Brandon Morey at Crepes Et Amis and I put on a concert a couple of years ago downtown. We also sponsor Little League teams. It’s one of those things that makes me happy, something I’ve wanted to do since I was a kid.

5. What are some of your interests and hobbies?

I love antiques. That’s clear if you come into the store. The front section looks more like the 1880s than 2020. I have about 50 typewriters. We write things up with a 1920 Underwood. We keep things analog in this digital world.

I have a horrible habit of being a collector of hobbies. I go all in. My wife wanted to start working in stained glass. I found online someone selling off their business, so now have a small stained glass shop in my basement. I also love woodworking. I have built the cabinets and counter here. I also like artwork in general.

6. What are some local businesses that you work with that help make your business a success?

We regularly try to refer people to 1UP Games. They do stuff we don’t do. Occasionally, we send people to Batteries Plus Bulbs. They have parts we don’t have. When somebody comes in with an old tube radio, we refer them to shops in Bay City and Saginaw. It’s reciprocal. Many send us business. Verizon and AT&T send us more customers than I probably get from advertising.

One of the most frequent things we have is wet phones. People put it in a bag of rice but it really doesn’t do anything. If you get your phone wet, put it in front of a fan to help the evaporation process. Don’t turn it on until you know it’s completely dry. It might take at least a full day.

"The purchase of Parentgiving enables Santex to bring our world-class incontinence and personal care products into the U.S. market," said Alessandra … END_OF_DOCUMENT_TOKEN_TO_BE_REPLACED

Washington [US], May 21 (ANI): Amazon has announced that its multi-part 'Borat' special will be making its debut on Prime Video. The special, titled … END_OF_DOCUMENT_TOKEN_TO_BE_REPLACED