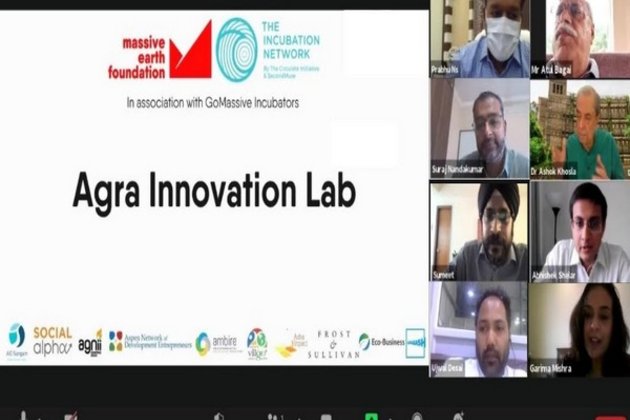 New Delhi, (Delhi) [India], July 29 (ANI/NewsVoir): As part of Clean Air Action Plan of the District Administration of Agra, the United Nations Environment Programme (UNEP) and its partners are providing support and technical assistance in the implementation of activities under the Plan. These efforts and the partnership with theAfter months of jury deliberations and vetting crowdsourced solutions, a Round Table Event was organized to showcase the four best solutions to address plastic pollution in Agra – which threatens to pollute water, soil and air (by its burning). In the event inaugurated by Atul Bagai, Head, UNEP India Country Office, selected start-ups presented their solutions to Prabhu N. Singh, District Magistrate, Agra and Nikhil T. Funde, Municipal Commissioner, Agra.

“I would like to commend massive foundation, which has been a partner since 2018 and the very innovative Agra innovation lab, which they have come out with,” said Atul Bagai.

“The local authorities at the district and municipal level and promotion of these by the massive earth foundation, the incubation network, AIL is a very interesting approach that we’ve been dreaming about for decades and they’re all coming together,” said Dr. Ashok Khosla, President of Development Alternatives, in his concluding remarks.

Four of these start-ups are ClearBot from Hong Kong, a swarm of Artificial Intelligence – powered, self-driving, water body trash collecting robots that can detect and collect trash from the river Yamuna; SpruceUp’s Jatayu Super that uses heavy vacuum sucker to collect litter from roadside, drains and hotspots; Lucro proprietary technology which makes low density polyethylene (LDPE) completely circular and recyclable and Recity, which has developed a software solution to track waste collection and improve revenue for municipal corporations from waste collection activities.

“We’re really excited with the way we’re moving towards a plastic-free Agra. The presentation we’ve had today was very informative and the innovation we saw today should be taken forward,” said Prabhu N. Singh, District Magistrate, Agra.

Every year, the world generates more than two billion tonnes of trash. Against the backdrop of a global pandemic, much being bought, sold, used and discarded. Where waste collection and disposal services are lacking, waste may be dumped in open, unmanaged areas where it is usually burned. Open waste-burning causes release of fine particles and other toxic gases that penetrate deep into human lungs and bloodstreams resulting in adverse health impacts. Under the Clean Air Action in Agra initiative, Massive Earth Foundation is working on promoting new technological innovations for improving air quality in Agra along with UNEP.

“Massive is committed to pollution reduction and waste is a key focus area for us. Waste is a complex problem and we focus on innovation, investment and creating infrastructure. Very soon we’ll be embarking on a journey to solve the problem of plastic pollution in the city of Agra,” said Garima Mishra, Head of Projects, Massive Earth Foundation.

The Agra Innovation Lab is a platform for the entrepreneurs, academicians, technical researchers, and innovators across the globe to accelerate and pilot test solutions that prevent plastic leakage into the environment. Of the 100 start-ups registered with AIL, leading start-ups were announced and Massive Earth Foundation will support them to initiate pilots that can be then scaled to other municipal cities of India.

Agra Innovation Lab received support from The Incubation Network, based in Singapore, as part of their entrepreneurship support activities. Other partners of the program include Agnii (part of the Office of Principal Scientific Advisor to PMO), AIC Sangam, Ambire, Asha Impact, ANDE, Eco-Business, Frost and Sullivan, Social Alpha, UnleashVillgro.

This story is provided by NewsVoir. ANI will not be responsible in any way for the content of this article. (ANI/NewsVoir)

WASHINGTON (BLOOMBERG, AFP) - Facebook is facing renewed fury from Washington after reports suggested the company knew, but did not disclose, that its … END_OF_DOCUMENT_TOKEN_TO_BE_REPLACED