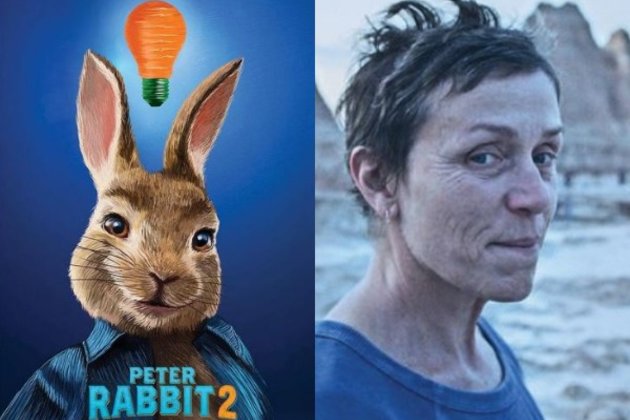 Washington [US], May 25 (ANI): ‘Peter Rabbit 2’ from Sony family and Disney’s Oscar champion ‘Nomadland’ topped the charts as the UK enjoyed its first full week of the box office in months.

According to Variety, the vast majority of cinemas in the UK are now open. Some 80 per cent of movie theatres across England, Scotland and Wales opened doors on May 17, with Northern Ireland due to reopen this week. However, cinemas in the Scottish city of Glasgow remain closed, as do all cinemas in the Republic of Ireland, a territory traditionally counted alongside the U.K. for box office collections.

‘Peter Rabbit 2’ and ‘Nomadland’ led the charts on the first two days of reopening, and the films held their positions for the rest of the week.

In third place was Warner Bros.’ creature face-off epic ‘Godzilla vs Kong’ with Euro 783,879, while Lionsgate’s horror franchise addition ‘Spiral: From The Book Of Saw’ collected Euro 779,107 in fourth place.

Rounding off the top five was Sony chiller ‘The Unholy’ with Euro 405,391.

Box office collections in total were Euro 8,672,924 (USD 12.2 million), meaning that ‘Peter Rabbit 2’ accounted for more than 50 per cent of the box office. In all, some 20 films released or re-released in the U.K. when cinemas reopened.

Opening in the middle of the holidays are manga ‘Demon Slayer: Mugen Train’ from Sony and, from Together Films, ‘The 8th,’ a documentary about the Irish anti-abortion movement. (ANI)

WASHINGTON (BLOOMBERG, AFP) - Facebook is facing renewed fury from Washington after reports suggested the company knew, but did not disclose, that its … END_OF_DOCUMENT_TOKEN_TO_BE_REPLACED