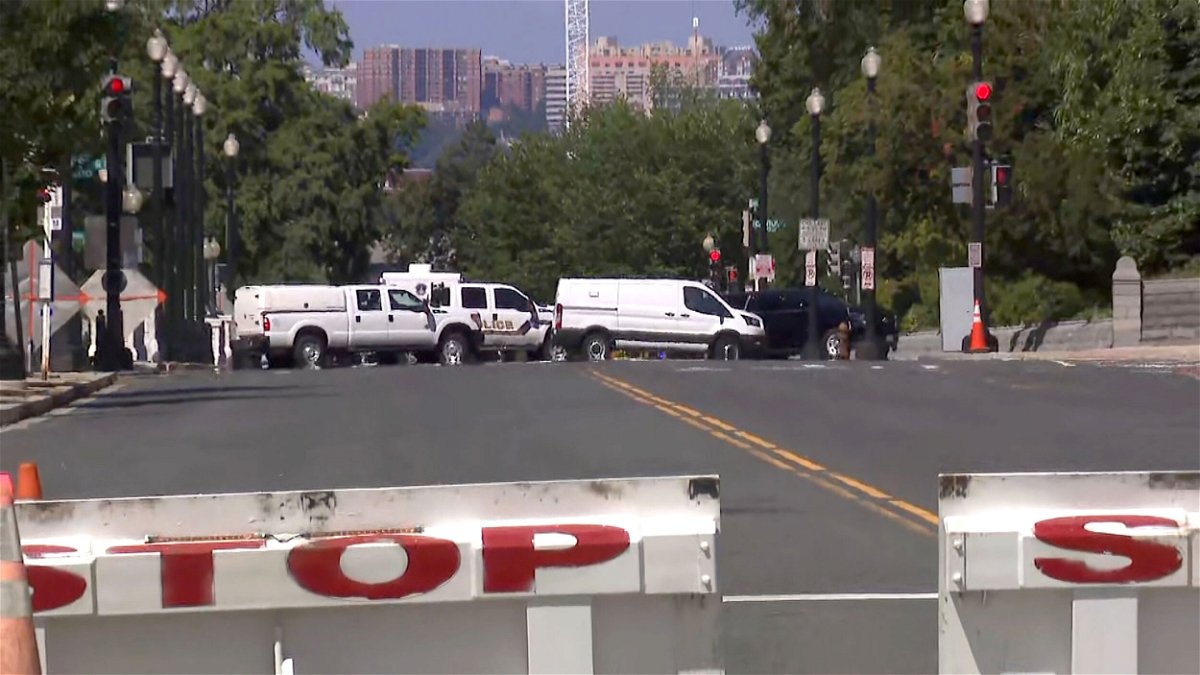 A man with a history of supporting former President Donald Trump and who has said “all Democrats need to step down” was arrested Thursday after an hours-long standoff near the US Capitol during which he claimed to have an explosive device.

Police have identified the suspect as 49-year-old Floyd Ray Roseberry of Grover, North Carolina. The incident prompted multiple buildings in the area to be evacuated Thursday as authorities responded to an “active bomb threat investigation,” the US Capitol Police wrote on Twitter.

USCP said in a news release later Thursday that no bomb was found in Roseberry’s truck but that he did possess suspected bomb-making material. DC Police said in a tweet that the vehicle he was driving had been “cleared,” and that road closures near the scene have now been lifted. USCP Chief Tom Manger, who told reporters on Thursday that authorities couldn’t yet identify a motive, said that so far there is “no indication” Roseberry was acting with others.

Roseberry had been live-streaming from the scene, Manger said. A roughly half-hour Facebook video showed him inside a truck, holding a cannister that he said was a bomb and speaking about a “revolution.” The video and Roseberry’s Facebook profile have since been removed.

On Roseberry’s now-removed Facebook page, he frequently made pro-Trump posts and posted videos from Trump’s “Million MAGA March” on November 14.

In video posted Thursday, Roseberry called himself a “patriot.” He said he doesn’t care if Trump ever becomes president again but also that he thinks “all Democrats need to step down.”

Roseberry’s son, Christopher Roseberry, told CNN on Thursday that he didn’t fully understand what motivated the actions of his father and that he didn’t know about his plans to go to Washington.

“He was home last night and I guess my stepmom woke up this morning and he was gone,” Christopher Roseberry told CNN. “It was just a normal day, but it’s not.”

Christopher Roseberry said his father expressed political frustrations with him after the November election. “Since Biden got elected he’s just been like, man … he doesn’t like change, I reckon. … I tried to tell him … ‘Who cares what goes on up there in DC? Worry about what you’ve got down here.’ I tried to tell him that and he’s like, ‘No, I’m sticking up for my country. We need to get the country back to the way it was,’” he said.

He said his father did not mention violence though, adding, “He just said, ‘I want to make a change.’”

Roseberry’s mother recently died, which his son said may have added to his frustration. Manger mentioned the loss during an earlier news conference, adding, “there were other issues that (Roseberry) was dealing with.”

Roseberry drove a black pickup truck onto the sidewalk in front of the Library of Congress at 9:15 a.m. ET, claiming he had a bomb and displayed what looked like a detonator to the officer on the scene, according to the chief.

Negotiators were in communication with Roseberry and were trying to come to a “resolution,” Manger told reporters at a press conference earlier Thursday near the Capitol.

The pickup truck Roseberry drove to the scene does not have license plates, sources told CNN.

Two Library of Congress buildings — the Jefferson and the Madison — and the Cannon House Office Building were evacuated earlier Thursday due to a suspicious vehicle in the vicinity, according to alerts sent to staffers viewed by CNN.

Staffers in the Madison and Jefferson buildings on Thursday were alerted by email to remain calm and relocate — and not to exit toward First Street. Those in Cannon were advised to relocate to the Longworth House Office Building using the Capitol’s underground tunnels.

The Senate and House are not in session, and most lawmakers are not currently in their offices.

The Supreme Court was also evacuated on the recommendation of US Capitol Police, according to a spokesperson for the court, which is closed to the public because of Covid-19.

House Speaker Nancy Pelosi thanked the officials who responded to the incident in a statement later Thursday, writing: “The immense gratitude of the Congress is with all law enforcement officers who today and all days sacrifice to keep the Capitol Complex and those within it safe.”

President Joe Biden has been briefed on the bomb threat on Capitol Hill, according to a White House official, who said the President “is receiving regular updates from law enforcement” on the matter.

Officials have been sounding the alarm over online extremist rhetoric that is strikingly similar to the buildup to the January 6 Capitol insurrection, with increasing calls for violence linked to conspiracy theories and false narratives.

CNN reported last week that Homeland Security Intelligence chief John Cohen said that although the conspiracy theories vary, there has been an ongoing narrative focused on the false premise that the presidential election was illegitimate. That narrative is paired with an increase in calls for violence to rectify the situation.

“It’s very similar to the stuff we saw prior to January 6,” said Cohen, the DHS Office of Intelligence and Analysis senior official performing the duties of the under secretary. But the comments have stopped short of specific dates and threats, he noted.

Nonetheless, the department recently issued a new terrorism bulletin warning the public about increasingly complex and volatile threats days after it alerted state and local authorities to an increase in calls for violence online tied to election-related conspiracy theories. The bulletin highlighted the potential for violence surrounding the 20th anniversary of the 9/11 attacks, as well as upcoming religious holidays.

This story has been updated with additional information.

WASHINGTON (BLOOMBERG, AFP) - Facebook is facing renewed fury from Washington after reports suggested the company knew, but did not disclose, that its … END_OF_DOCUMENT_TOKEN_TO_BE_REPLACED