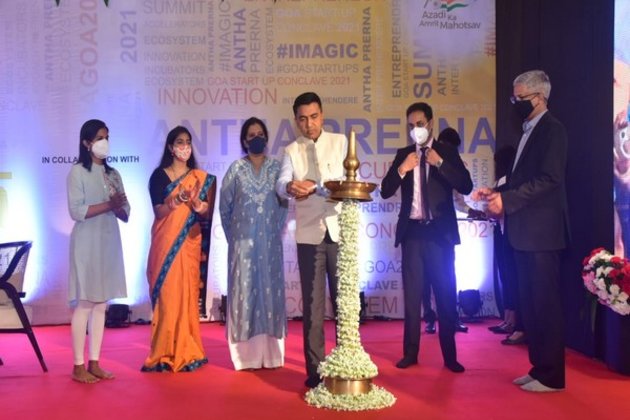 The plans of upscaling the connectivity and infrastructure in the State are already in motion, as well as the setup of various other incubation cells to encourage healthy startup investments to motivate young promising entrepreneurs, Sawant said.

“Inaugurated, Antha Prena a Startup Conclave and Entrepreneurship Summit. Antha Prerna aims to provide opportunities and platform to the young Entrepreneurs and to create an ecosystem to foster a culture of ideation and innovation in Goa”, he said in a tweet.

Talking about his vision Sawant said, “My vision is to make Goa state top in the startup ecosystem in 2025. At present, we are in the fourth state in India, he also added that It is not for the IT sector but in other sectors also the Goa government will give its whole support.”He appealed to the youth to contribute with the government to make Goa self-reliant in terms of the IT sector by starting start centres in rural areas of Goa.

Minister for Revenue, Jenifer Monserrate said through the state’s startup cell they have helped hundreds of investors, partners, incubators, and business mentors to build a sustainable and growth-intensive startup culture in our beautiful state.

Monserrate said through constant networking, community-building activities and mentoring sessions our aim is to provide the Goan Startup with the exposure and opportunities to access global platforms. “In the past, we’ve organized workshops and flagships events like the Global VC Summit, Microsoft’s 100 unicorns, the Goa IT Summit, and Vibrant Goa 2019 to just name a few,” she said.

Director Department of ITCEO of Startup Promotion Cell Ankita Anand in her address said that Goa has been an emerging startup destination two years back but today it is truly making a mark with the increasing number of successful Goan start-ups.

Anand further added that the startup conclave – aims to build a stronger startup Ecosystem by boosting the Entrepreneurs within the budding startups and connecting them with various investors.

The conclave will give an opportunity for enabling direct startup- Investors. There would be experience-sharing sessions by successful startups. The central government and state government representatives would be explaining various facets of enabling startups growth. As the New Goa startup Policy is in the anvil, we would be enabling the changes that have been proposed to assist the Startup Ecosystem. (ANI)

WASHINGTON (BLOOMBERG, AFP) - Facebook is facing renewed fury from Washington after reports suggested the company knew, but did not disclose, that its … END_OF_DOCUMENT_TOKEN_TO_BE_REPLACED