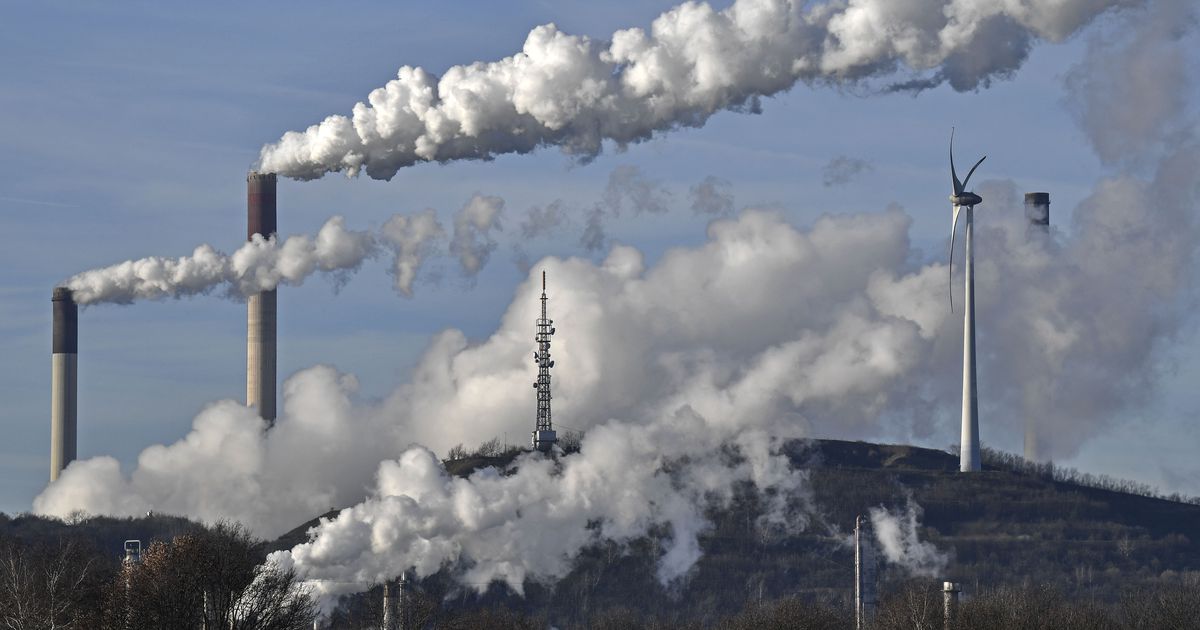 Carbon dividend plan would protect environment without harming the economy.

This Jan. 16, 2020, photo shows a Uniper energy company coal-fired power plant and a BP refinery beside a wind generator in Gelsenkirchen, Germany. The world hit another new record high for heat-trapping carbon dioxide in the atmosphere, despite reduced emissions because of the coronavirus pandemic, scientists announced Thursday, June 4, 2020.

By Tarek Mango | Special to The Tribune

As debate heats up in Washington over how to meet ambitious climate goals, it’s essential that the voice of small business is heard. In Utah and across America, small businesses stand ready to do our part to reduce emissions. But we need a climate strategy that strengthens the economy as we protect the environment.

So far, much of the climate conversation in Washington has centered around heavy-handed proposals. If enacted, these measures would impose climate regulations on every sector and assign efficiency standards to every product. This won’t work very fast. And it would throw a wet blanket on the economy.

Instead, Main Street thrives when Americans feel confident about their current finances and future opportunities. It also succeeds when entrepreneurs are emboldened to pursue their ideas and know they will get a fair shake in the marketplace. With the right strategy, we can support the American consumer, nurture our economic vitality and help the climate all at the same time.

Given this, small businesses should support the Baker-Shultz Carbon Dividends Plan. Originally advanced by former Secretaries of State James A. Baker III and George P. Shultz, the carbon dividends strategy has earned the support of U.S. business and environment leaders alike. That’s because the plan recognizes that free enterprise can go hand-in-hand with a cleaner environment.

Here’s how it works: The plan would charge fossil fuel companies a fee for their emissions and return the revenue directly to the American people in the form of quarterly dividend checks. It would also phase out unnecessary regulations and, through a border adjustment, hold other countries — like China, Russia and India — accountable for their emissions so that U.S. businesses can fairly compete.

First, no climate proposal would do more to stoke consumer demand than the Baker-Shultz Carbon Dividends Plan. Carbon dividends is unique among climate approaches in that it generates revenue that can be cycled back to households to help family budgets. One thing is certain: If we put money in people’s pockets, they will spend it, supporting small businesses along the way.

Eight in ten Utah families, on average, will come out financially ahead with this plan, with a family of four receiving about $2,000 per year. People are free to spend the money however they wish. They may invest in energy-efficient appliances or other ways to lower their emissions. Or they may buy goods and services they value. Either way, Main Street wins.

Second, the carbon dividends plan would sideline the environmental regulations that burden our economy. Regulations drive up energy costs yet do nothing to help consumers. They also harm small businesses disproportionately, as larger businesses have armies of lawyers and accountants to navigate the paperwork required for compliance. By contrast, a carbon fee paired with regulatory simplification would introduce a straightforward price signal and create a level playing for businesses of all sizes.

By giving entrepreneurs certainty and a clear incentive to innovate, this plan would unleash the full power of American ingenuity toward a low-carbon future. Any idea that supports sustainability would be fair game — whether it comes from a big corporation, a local business or a tinkerer in his garage. And all successful ideas would get rewarded the same in the marketplace. Small businesses are agile, resourceful, and creative. They will put those qualities to use—to the benefit of the economy and the planet.

Finally, the Baker-Shultz Plan ensures that countries like China don’t take advantage of America as we switch to clean energy. Small businesses cannot stomach a policy that reduces emissions at home only to let them grow overseas. This plan prevents this by charging foreign imports for their carbon emissions at the border, compelling other countries to lower their emissions. In addition, given US companies are already cleaner and more efficient than our overseas competitions, this would hand an instant competitive advantage to energy-intensive producers across the U.S., including many small manufacturers right here in Utah.

When you add up all these benefits for consumers and businesses, it’s hardly surprising that a carbon dividends policy delivers far more growth for the U.S. economy as a whole. In fact, this approach would generate an additional $190 billion per year in economic output, on average, compared with a regulatory approach to cutting the same emissions. That’s no small difference.

America faces a stark choice on climate. It’s time for small business to speak up with one voice in support of a commonsense policy. The Baker-Shultz Carbon Dividends Plan will boost the American consumer, remove onerous regulations for businesses and ensure other countries do their part to reduce emissions. It’s a win for the environment and a win for Main Street.

Tarek Mango is the managing director of Mango Enterprises, Sandy.

(The Center Square) – A federal judge has ruled Union City farmer Robert Holman’s lawsuit against the U.S. Department of Agriculture over COVID-19 … END_OF_DOCUMENT_TOKEN_TO_BE_REPLACED