The first time can be disorienting. You walk past shelves brimming with instant ramen — curry, seafood, chili tomato — all in packages of bright red, orange and yellow.

Deep-fried rice crackers and soy-flavored potato chips fill another aisle, not far from a bewildering selection of sugary candies and a dozen brands of sake.

There are so many carefully prepared meals, glistening in their clear plastic containers, it is difficult to focus. How fresh are they? Some don’t have expiration dates — they have expiration hours.

All of which makes you blink your eyes and look back over your shoulder to double-check the familiar green, red and orange sign you passed on the way in.

Eating can be troublesome at the Summer Olympics. Journalists, sports officials and support staff work ungodly long days, the dining choices at arenas and stadiums limited to soft drinks and hamburgers.

Tokyo’s omnipresent convenience stores — known as konbini — have extended a lifeline to some 42,000 accredited foreigners who converged here for the Games. This kind of selection, this degree of quality, in a store still open when you return to your hotel past midnight, isn’t just convenience. It’s paradise.

A 7-Eleven clerk at a store in Tokyo stocks one of the food shelves.

Aside from the glare of fluorescent lighting and omnipresent coffee machines, konbini have little in common with their American counterparts.

Estimates place their number on this island nation between 50,000 and 60,000; they abound in Tokyo, averaging about eight per square mile, with 7-Eleven, FamilyMart and Lawson as the most common chains.

Though not especially large, these stores are packed with a startling range of goods. Where else can you buy concert tickets, men’s underwear and tuna mayo onigiri wrapped in savory seaweed while also paying your monthly utility bill?

Premade meals fill the shelves at 7-Elevens in Tokyo.

On a Friday afternoon, a team official from Thailand perused the toiletries section where a pair of quality nail clippers can be had for a few dollars. The ATMs often accept foreign debit and credit cards.

But packaged meals and delicacies are where these stores truly shine, with so much more than ever-rotating hot dogs and re-warmed chicken strips. The selection changes constantly, new arrivals announced weekly on the internet, anticipated with the same fervor otherwise reserved for the release of Yeezy sneakers or an album drop.

Featured items during the final days of the Games included plump sea urchin rice bowls and pork yakiniku bento with onion sauce. 7-Elevens, owned by a Japanese corporation, have collaborated with Michelin star restaurants on Tsuta Ramen and other instant noodles.

“The quality is next level,” says Kaila Imada, a senior editor for the multiplatform Time Out Tokyo, who has written connoisseur’s guides to the konbini. “You can find dinner there and it will be a top-notch dinner.”

A showcase for compelling storytelling from the Los Angeles Times.

Not everything is fancy — the late food critic Anthony Bourdain once raved about Lawson’s egg-salad sandwich.

“So I’ve given up many vices in my life, many shameful, filthy, guilty pleasures that I used to like that I just don’t do anymore. Cocaine, heroin, prostitutes, the musical styling of Steven Tyler,” he said during his “Parts Unknown” series on CNN. “One thing I just can’t give up. One thing I keep coming back to every time I come back to Japan.”

Bourdain referred to the plastic-wrapped sandos — as they are called here — as “pillows of love.”

The initial jolt is more than visual. This immersive experience begins at the sliding glass doors as you leave the city’s heat behind, stepping into a blast of air conditioning. Music plays from hidden speakers, accompanied by a symphony of commerce.

A convenience store is a world of sound. From the tinkle of the door chime to the voices of TV celebrities advertising new products over the in-store cable network, to the calls of the store workers, the beeps of the bar code scanner, the rustle of customers picking up items and placing them in baskets, and the clacking of heels walking around the store. It all blends into the convenience store sound that ceaselessly caresses my eardrums …

A convenience store is not merely a place where customers come to buy practical necessities. It has to be somewhere they can enjoy and take pleasure in discovering things they like.

This public communion draws congregants of all ages and demographics. In the morning, salarymen with their pressed white shirts and briefcases wait in line behind kids getting something to eat before school. Workers in blue coveralls stop by for lunch. Dinnertime? Be prepared to wait.

A love of konbini and its community spurred two Americans living in Japan, Michael Markey and Matthew Savas, to start a podcast last year. “Conbini Boys,” which uses an alternate spelling, has grown to 62 episodes.

“It’s structural to Japanese society,” Savas, who has since moved back to the U.S., says of the stores. “You’ll see all kinds of people going to a konbini.” 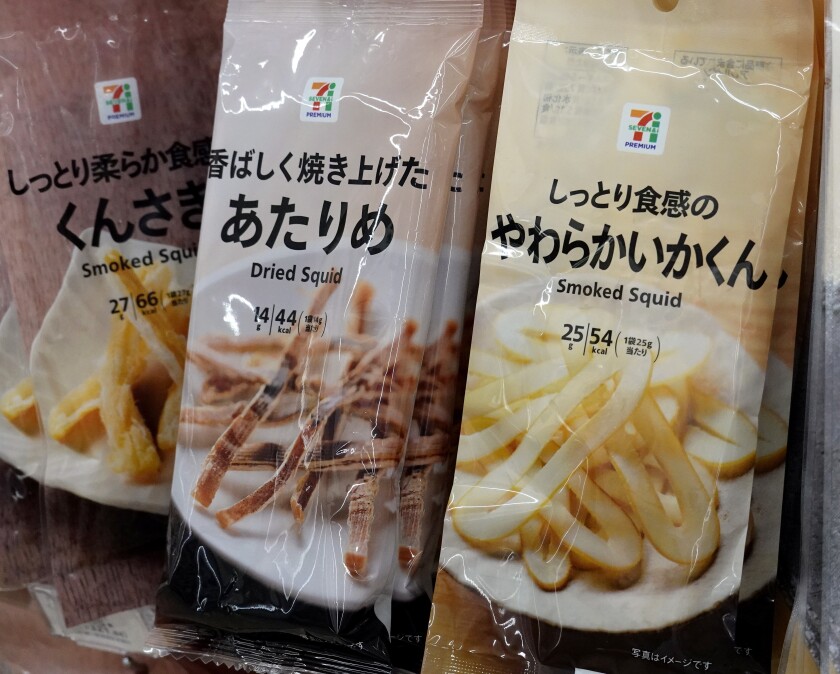 The prices are reasonable, with meals costing $3 to $6. A dollar buys a puck-sized korokke — or croquette — with a blend of potato and beef that tastes both sweet and savory. People can rely on the stores to be open, no matter what.

“We call them our local superheroes,” Imada says. “They’re always there for us, 24 hours a day, whatever you need … they’re always open regardless of rain, shine or typhoon.”

Shinichi Mine and Satoshi Tanaka, whose “TabiEats” YouTube channel has more than 500,000 subscribers, visited Los Angeles before the pandemic and decided to sample breakfast at an American 7-Eleven. They were in for a surprise.

“It says fresh fruits on the container, but actually it wasn’t fresh. It was actually previously frozen because the fruits were soggy and bad,” Mine said. “Even the breakfast sandwich was soggy for some reason.”

“Why can’t a simple thing like this be a bit better?” he asked. “It’s kind of strange.”

The bottom line might be part of the answer.

Because they throw out fresh items that aren’t sold quickly enough, konbini account for part of an estimated 640,000 tons of food wasted annually in Japan, according to a 2019 report by the NHK news service. Lawson and 7-Eleven started programs to discount items close to their expiration time. 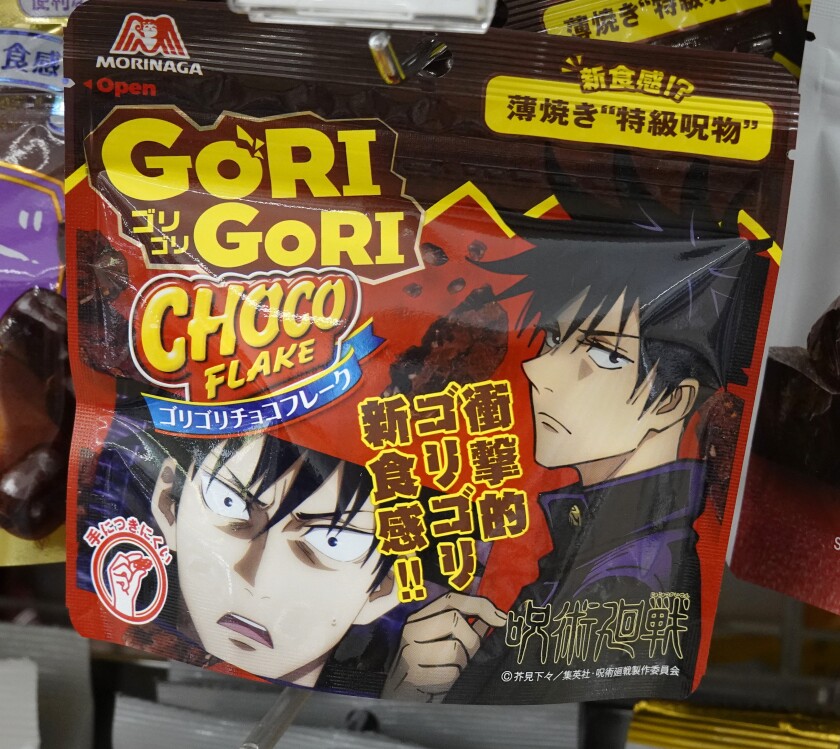 Chunky chocolate flakes are among the items available at 7-Elevens in Tokyo.

“In the U.S., the idea of convenience is linked not only to the idea of quick, but also cheap,” Linda Hagen, an assistant professor who studies consumer behavior at USC’s Marshall School of Business, wrote in an email. “So this close mental association that convenience equals fast, cheap, unhealthy is a big part of why convenience stores offer the assortments they do.”

Konbini have played a special role at these Pandemic Games. 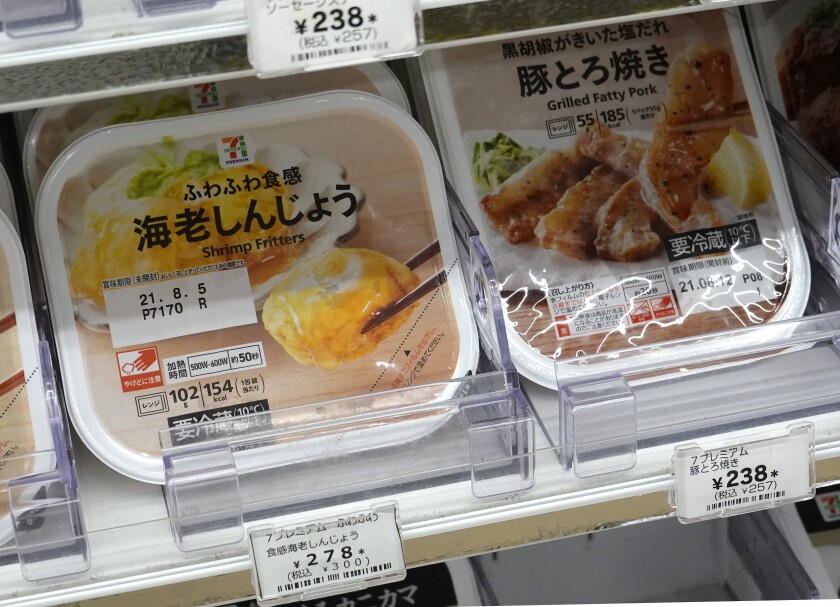 You can buy shrimp fritters and grilled fatty pork at 7-Elevens in Tokyo.

With coronavirus cases surging in Tokyo, foreigners have been asked to limit interaction with the populace, but convenience stores have been a conspicuous exception. Pump bottles of sanitizer are stationed at the entrance and plastic sheets hang in front of registers.

No fluency in Japanese is required; checkout counters feature large touch screens that guide customers through transactions. With a minimum of pointing, a typically patient clerk shows an Uzbek journalist how to feed coins into the cash slot and everyone has learned to gesture if they need a plastic bag. Not all meals have English on the label, so people crowd around the refrigerated shelves, scrutinizing the fried rice and beef dishes, grabbing whatever looks good.

The mention of convenience stores among Americans here prompts smiles and starts everyone chattering about their favorite purchases. Savas rhapsodizes about shopping at a konbini early on, trying a dish called chiki, which is boneless chicken from a hot box.

“I distinctly remember sitting in my car, biting into it and a gush of juice bursting out of the chicken, splashing my glasses and clothes,” he said. “From that day forward, I was a changed man.”

Each visit offers so many choices, so many opportunities for something you have never tasted before. Growing bolder with experience, you might reach for deep-fried fish paste or smoked gizzards.

The first time at a konbini, though, can be tough.

Your eyes dart from package to package as the theme song from “The Little Mermaid” tinkles in the background. All those shapes and textures, the Japanese characters in bold type. So many colors — crimson, chartreuse, neon yellow — you don’t normally associate with food.

The first time, you might just reach for the egg-salad sandwich.

WASHINGTON (BLOOMBERG, AFP) - Facebook is facing renewed fury from Washington after reports suggested the company knew, but did not disclose, that its … END_OF_DOCUMENT_TOKEN_TO_BE_REPLACED