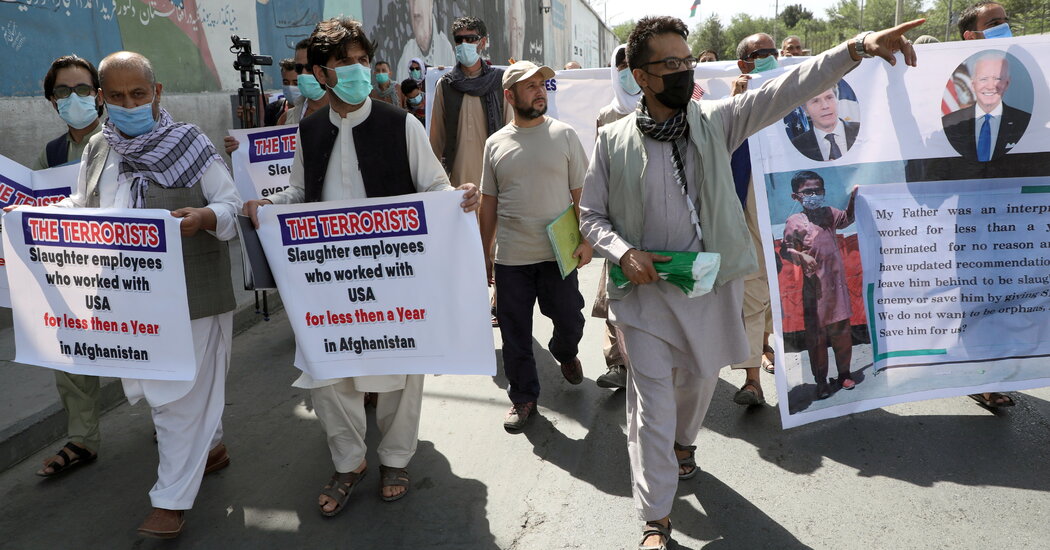 The Biden administration will begin “Operation Allies Refuge” in the last week in July to support the airlift of Afghan nationals who aided the United States and are endangered by the withdrawal of U.S. troops, administration officials said on Wednesday.

Critical details of the initiative — such as who would ultimately be eligible for evacuation, what role the U.S. military would play and where evacuees will be sent — are not likely to be made public until the operation in complete, said Jen Psaki, the White House press secretary.

The move comes following an outcry among interpreters who worked with U.S. officials and amid growing criticism of Mr. Biden’s policy at home, most notably from former President George W. Bush, who ordered the invasion of Afghanistan following the Sept. 11, 2001, terrorist attacks. Mr. Bush has argued that the pullout will lead to a geopolitical and humanitarian crisis.

“I am afraid Afghan women and girls are going to suffer unspeakable harm,” the former president said in an interview on Wednesday. “They are scared.”

Afghans wishing to participate needed to already be in the “pipeline” of the State Department’s Special Immigrant Visa program, said the administration official who announced the mission, adding that it would be limited to those who “supported the United States and our partners in Afghanistan.”

More than 18,000 Afghans who have worked as interpreters, drivers, engineers, security guards, fixers and embassy clerks for the United States during the war have been trapped in bureaucratic limbo after applying for special immigrant visas, available to people who face threats because of work for the U.S. government. The applicants have 53,000 family members, U.S. officials have said.

The mission fulfills a pledge by Mr. Biden to not repeat the abandonment of U.S. allies during the withdrawal from Vietnam, and comes as the Taliban gain more ground throughout Afghanistan, seizing swaths of territory, displacing tens of thousands, and wounding or killing hundreds of civilians.

“We are taking these steps because these are courageous individuals,” said Ms. Psaki who declined to say how many U.S. allies have already been killed by the Taliban. “We want to make sure we recognize and value the role they’ve played over the last several years.”

Among former Afghan interpreters, news of Mr. Biden’s decision was greeted with skepticism.

“They’ve promised a lot, and so far they’ve given nothing,” said Omid Mahmoodi, a former interpreter. “I’m still not believing it. There are thousands who will be left behind.”

Some interpreters have minor blemishes on their service records which have hurt, or even destroyed, their chances at securing a visa thus far. Others criticized plans to send ex-interpreters to countries other than U.S. while their applications are processed.

Sherin Agha Jafari, another interpreter, said there were dozens like himself who were considered ineligible for “very small reasons,” even though they were greatly at risk in the event of a Taliban takeover.

“I feel we will not be getting a visa,” he said. “The problem is that nobody is talking about the terminated combat interpreters. Their service is called ‘unfaithful’ so they will not be given visas. There are a lot like this.”

Some of those who worked with U.S. forces were relieved, however.

“Very glad to hear the news,” said Wahidullah Rahmani. “I think I’m on the list. But it’s going to take a little bit of time for them to process me.”

In December 2020, Congress added an additional 4,000 slots to the special visa program in preparation for a pullout that was supported by both President Biden and his predecessor, President Donald J. Trump. Since 2014, the program has issue about 26,500 visas to foreign nationals deemed at risk for their cooperation with U.S. forces.

The Afghan evacuations will be directed by Ambassador Tracey Jacobson, a three-time chief of mission in Tajikistan, Turkmenistan and Kosovo, and include representatives from the Departments of Defense and Homeland Security, the official added.

The announcement on Wednesday announcement was part of the complex, double-time choreography of moves required to quickly end a deployment two decades in the making.

General Austin, who relinquished his command at a muted ceremony in Kabul on Monday, was greeted at Joint Base Andrews by Defense Secretary Lloyd J. Austin III and Gen. Mark A. Milley, the chairman of the Joint Chiefs of Staff. While in Washington, General Miller is expected to brief President Biden and other senior administration officials. He is expected to retire later this year.

Rear Adm. Peter G. Vasely, a former Navy SEAL, will take charge of the security mission at the United States Embassy in Kabul.

WASHINGTON (BLOOMBERG, AFP) - Facebook is facing renewed fury from Washington after reports suggested the company knew, but did not disclose, that its … END_OF_DOCUMENT_TOKEN_TO_BE_REPLACED