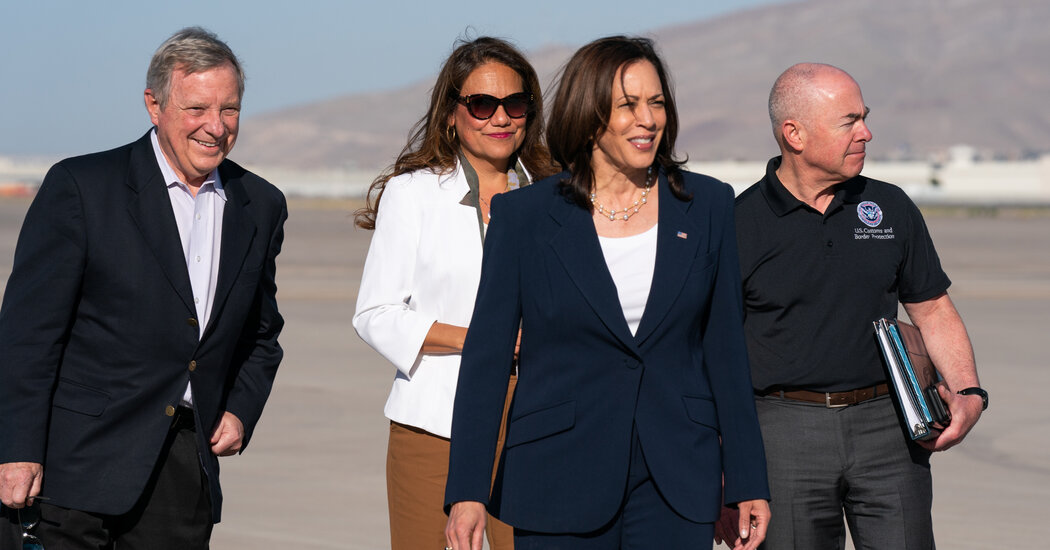 Vice President Kamala Harris will tour a U.S. Customs and Border Protection processing center and meet with migrants when she travels to El Paso on Friday, a trip that was pulled together as Republicans criticized her for not visiting the U.S.-Mexico border as part of her work addressing the surging numbers of migrants.

Representative Veronica Escobar, a Democrat whose district includes El Paso and who will travel with Ms. Harris, said the trip will give the vice president “a very broad perspective on the ground” and an idea of what happens when officials don’t address the root causes of migration.

“We’ve neglected to do that, and what has happened as a result is chaos and really poor management of people at our nation’s front door,” she said.

Along with Ms. Escobar, Ms. Harris is traveling with Senator Dick Durbin, the chairman of the Senate Judiciary Committee who has been involved in past attempts at bipartisan immigration reform. Ms. Harris is also traveling with Alejandro N. Mayorkas, the secretary of homeland security.

The vice president will visit U.S. Customs and Border Protection’s El Paso Processing Center, where she will receive a briefing from officials on the “administration’s efforts to combat transnational crime,” Symone D. Sanders, the vice president’s press secretary, told reporters on Thursday evening. The vice president will also meet with migrants who are being held at the center, as well as with immigration advocates, and she will speak to reporters and take questions, Ms. Sanders said.

The trip came together quickly after Ms. Harris was criticized on her last trip to Mexico City and Guatemala, where Lester Holt of NBC grilled her about why she had not visited the border. She responded by calling the visit a “grand gesture” and pointed out that she had not visited Europe yet, either — answers that confounded her critics and members of her own administration. Ms. Escobar said that she reached out to Ms. Harris’s office shortly after the trip to pitch El Paso as a place to visit and that her request was “well received.” The trip was quickly arranged.

In El Paso, Ms. Harris will be visiting a major port of entry and a city that has complicated ties to former President Donald J. Trump, who will travel to the border with Gov. Greg Abbott of Texas days after Ms. Harris visits.

During Mr. Trump’s presidency, he called El Paso “one of our nation’s most dangerous cities,” castigating it as overrun by immigrants and crime. In 2019, when 22 people were killed at a Walmart and the white suspect warned of a “Hispanic invasion,” Mr. Trump was met with protests when he visited to meet with the families of the victims.

On Wednesday, a group of House Republicans said they would join Mr. Abbott and Mr. Trump on their trip, a move intended to add more pressure on the Biden administration, which has struggled to chip away at Mr. Trump’s “zero tolerance” immigration policies while warning migrants not to make the journey to the United States. The Biden administration has also been criticized for retaining Title 42, a Trump-era rule that allows the U.S. government to expel migrants, including asylum seekers, for public health reasons. The administration is working on its plans to phase out that rule.

Ms. Harris’s office denied that politics were at play behind her visit.

“This administration does not take their cues from Republican criticism, nor from the former president of the United States of America,” Ms. Sanders said, adding that the trip made sense for the vice president’s schedule and “our partners on the ground.”

The number of unaccompanied minors crossing the border has hit a record high under the Biden administration, and officials have struggled to quickly move them out of cramped facilities and into the care of family members. A surge in the apprehensions of single adults — some 121,000 last month — has offset a small decline in the number of unaccompanied minors and families traveling north, according to U.S. Customs and Border Protection data.

WASHINGTON (BLOOMBERG, AFP) - Facebook is facing renewed fury from Washington after reports suggested the company knew, but did not disclose, that its … END_OF_DOCUMENT_TOKEN_TO_BE_REPLACED