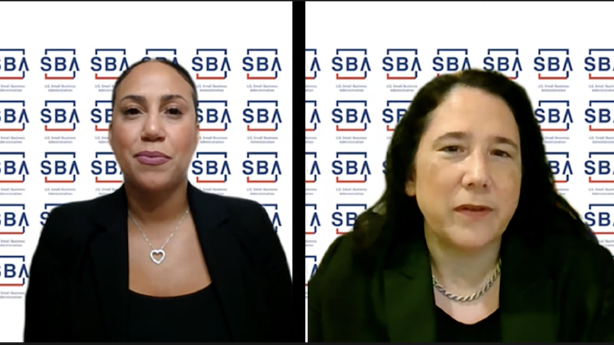 Thursday is the 101st anniversary of 19th Amendment ratification, giving American women the right to vote, though most women of color were excluded until decades later. A century later, women are still fighting for economic and political equality, explained Jennifer Klein during the virtual conversation.

Although women start businesses at a more rapid rate than men and are a growing share of U.S. businesses, women entrepreneurs — especially Black women — still raise much less capital and are less likely to get venture funding than businesses started by men, leaving women entrepreneurs more likely to rely on personal funds, said Klein, deputy assistant to President Joe Biden and co-chairwoman of the White House Gender Policy Council, in her opening remarks.

“Women-owned businesses start small and stay small because they lack access to capital or markets to grow,” said Isabella Casillas Guzman, administrator of the Small Business Administration, said. “It’s no secret that the venture capital field is largely male-dominated,” and this year’s decrease in venture funding for women is “all the more concerning because it came on the heels of years of increases.”

During the COVID-19 pandemic, millions of women lost their jobs and millions have yet to fully return to the workforce. According to research from Babson College’s Diana International Research Institute, around 64% of women business owners say that COVID-19 negatively impacted their revenue. With school and day care closures, women across the nation sacrificed professional development and took on the burden of child care and home schooling.

“Women and women of color are so often the first fired and last hired when a crisis hits,” Klein said.

In Utah in particular, women have lost twice as many jobs as men, according to data from the Kem C. Gardner Policy Institute. The biggest job losses were in typically female-dominated industries that were hit hard by COVID-19, like health, education and personal services.

Utah ranked last in equality for women for the fourth year in a row this year, according to WalletHub. “Some of us are trying pretty damn hard not to be dead last in this ranking every year. Obviously, not enough of us,” Lt. Gov. Deidre Henderson tweeted on Tuesday.

It’s #WomensEqualityDay, and while we celebrate the trailblazers, there’s no denying that we have so far to go. Utah ranked last in the nation–again–for women’s equality this week. From workplaces to health, education and political empowerment, women in Utah deserve better pic.twitter.com/5SZcVPpSWW

The key to improving conditions for women who own small businesses, Guzman said, is to “come to the SBA for help.”

The Small Business Administration has made efforts to connect women small business owners to the resources they need to survive and thrive during the pandemic through initiatives like Ascent, a free learning platform for women entrepreneurs, and the 33-year-old Office of Women’s Business Ownership that maintains 136 Women’s Business Centers across the country.

Guzman also said the bipartisan infrastructure bill will be “a game-changer for small businesses,” particularly in underserved communities.

Their mission is “to enable and empower women entrepreneurs through advocacy, outreach, education and support through the management and technical assistance provided by Women’s Business Centers,” said Natalie Madeira Cofield, assistant administrator of the Office of Women’s Business Ownership. And they provide training in a wide variety of topics in many languages, she added.

Guzman referred to a study done by investment banking company Morgan Stanley that said “multicultural and women-owned businesses could account for $6.8 trillion in gross receipts if they matched their percentage of the labor force and business revenues were equal to traditional firms. This would represent nearly three times the current output, with a missed opportunity of $4.4 trillion.”

“Research has shown that when women have more income, everyone benefits,” Guzman continued, because the majority of women spend most of their money on their family’s needs, putting that money back into the local economy in a way that also helps men and children.

One of the Small Business Administration’s main focuses during the pandemic “shecession” is to reach women-owned and disadvantaged businesses, especially in rural areas. The main way they are doing this is through the soon-to-be-launched Community Navigator Pilot Program, which is based on a hub and spokes model with a larger, more established organization reaching out to assist smaller local companies.

Earlier this year, Biden announced a goal of increasing the share of contracts the federal government offers to small, underserved businesses by 50%, so the Small Business Administration is working to enhance the certification process to help women-owned businesses get contract-ready.

Tech integration is also a vital aspect of businesses during the pandemic, which is why the Ascent platform was created to give women entrepreneurs the resources they need to recover and rebuild, Guzman said.

The future for women in business, according to Guzman, is “growth, growth growth” and women getting the help they need to start “building the companies of their dreams.”

Women Business Center Utah, one of the Office of Women’s Business Ownership centers, also celebrated Women’s Equality Day by offering complementary luncheons for women entrepreneurs from the 89,000 women-owned businesses in Utah in various cities across the state to allow them to connect and share their experiences and needs as business owners and help guide the Women’s Business Center Utah in providing accessible, diverse and inclusive services.

WASHINGTON (BLOOMBERG, AFP) - Facebook is facing renewed fury from Washington after reports suggested the company knew, but did not disclose, that its … END_OF_DOCUMENT_TOKEN_TO_BE_REPLACED