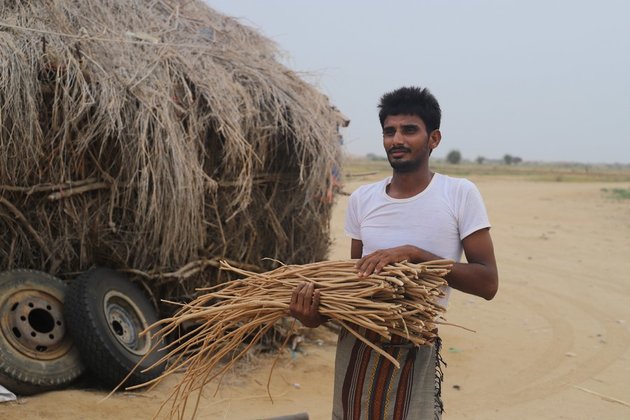 In Yemen, many people are used to selling the roots of Salvadora Persica, also known as the toothbrush tree, as a source of income. However, the civil war has devastated the country’s economy, making this small business even harder than before.

HAJJAH, Yemen, July 3 (Xinhua) — In Yemen, Salvadora Persica, otherwise known as the toothbrush tree, spreads along the Red Sea’s hot and dry coastal plain, where many people use its roots to clean teeth and thousands of families have tried to sell them as a source of income even since before the civil war.

Yemen has been mired in the civil war since late 2014 when the Houthi rebels seized control of several northern cities and forced the internationally recognized government out of the capital Sanaa, which has devastated the country’s economy, pushing millions to the brink of famine.

“We work for hours to collect a handful of the roots. We first search for suitable roots near the surface, and then we dig a wide hole about one meter deep below the tree. Finally, we sell the roots to shops and street vendors,” Naif Abdo Al-Jaidi, a resident in the Midi district of the northern province of Hajjah, told Xinhua.

“Our business thrived in the years before the war, but the war has hampered everything, forcing us to flee our homes several times and causing the closure of many markets and roads in and between the cities,” Al-Jaidi said.

“The war has turned our lives into hell,” he added.

Al-Jaidi, his brothers, and their families start their work in the morning or early evening to escape the summer heat, which soars up to 40 degrees Celsius at noon.

They cut the roots that look like stick-shaped slim twigs and have moist bark with a fragrant scent, before burying the pits and leaving to allow the tree to continue to grow. They then peel the roots into short sticks and the top end into a brush. This natural toothbrush called Miswak in Yemen is now ready for sale.

Abdo Bari, 55, is also struggling to collect the roots to sell them in exchange for a meal for his family.

“We collect a few roots now and we hardly sell them. This business is no longer feasible after the outbreak of the war, which led to the rising prices of fuel and transport, as well as the closure of many markets and main roads between cities … The situation has become very difficult,” Bari said.

WASHINGTON (BLOOMBERG, AFP) - Facebook is facing renewed fury from Washington after reports suggested the company knew, but did not disclose, that its … END_OF_DOCUMENT_TOKEN_TO_BE_REPLACED