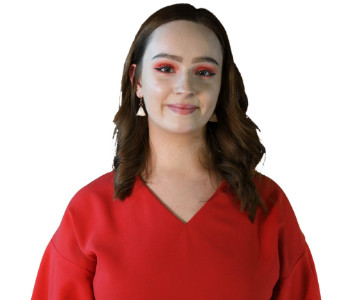 Students and graduates from Northumbria University were among more than 40 new business founders to have their talents showcased during a prestigious online awards event.

Organised and hosted by learning and development agency FIRST, Startup Awards North East provided an opportunity for new business owners to pitch for support and build their professional networks, whether they were at the starting-up, skilling-up or scaling-up stage with their businesses.

Those involved spoke passionately about their entrepreneurial ambitions to audiences made up of more than 300 members of the North East business community and bid for their chance to win both Social Impact and High Growth awards.

Second year Fashion Design student Amy Clunes was one of seven finalists from Northumbria and was selected as joint winner of the Social Impact Award after she took part in the SkillUP day.

The 20-year-old has been working with Northumbria’s Student and Graduate Enterprise team as part of the placement year offered on her course. She has shown real promise while working to develop her fledgling fashion and accessories brand, Whozamy.

Amy explained: “The placement year is a real bonus on the course because it gives students like me the chance to link up with a business and spend time in the world of work. But I knew my end goal would be self-employment and working for myself, so I chose to spend my time on placement with the enterprise team.”

With support from the Northumbria enterprise team and introductions to organisations like FIRST, Amy has attended meetings, training sessions and webinars which have helped her build vital skills such as book keeping, website building and marketing.

She added: “I’m doing a Sage accounting course at the moment and working towards launching my own website. The support I’ve had has been amazing and I’m really excited to see what the future holds.”

Amy was inspired to start her own business after friends commented on her hand-made earrings and she went on to sell hundreds of face masks online at the height of the pandemic. Her goal is to produce her own clothing using sustainably sourced fabrics which are less harmful to the environment. She also plans to make her designs size inclusive by creating them in sizes 6 to 22.

Amy and the other winners from Northumbria are part of the European funded Northumbria Enterprise and Business Support (NEBS2) project. This specialist scheme brings in professional mentors to support prospective entrepreneurs as part of an end-to-end business start-up support service.

Graham Baty, who manages the enterprise strand of the service, said: “We are very lucky to work with fantastic students and graduates and it has been incredible to see their potential continue to grow and flourish during the pandemic, which has been a challenging time for so many businesses and individuals.

“The ERDF NEBS2 Project has enabled us to further enhance our offer with fantastic opportunities for our start-ups to focus on business growth. It’s wonderful to see the efforts of so many recognised and celebrated through initiatives like the FIRST Startup Awards North East.”

Amy is celebrating her win alongside a host of other Northumbria students and graduates who were selected as finalists and saw the University represented across all three categories.

Mechanical Engineering PhD student Farzaneh Hajirasouliha was joint Social Impact award winner with Amy after pitching a business idea, named Vivid Futures, which would deliver workshops in schools and colleges to demonstrate how curriculum subjects are used in the world of work.

Also in the SkillUP category, Paul Kane and Carla Prior made the final. Callum Mather was recognised as a finalist in the StartUP category and Andrew Cartwright reached the final of the ScaleUP day.

Charlotte Windebank, Managing Director and Co-Founder of FIRST, said: “After the year we have had, early stage founders need to be celebrated, showcased and connected in to the business ecosystem now more than ever.

“Running the awards, whilst incredibly challenging, was the right thing to do and we are so proud of everyone involved. This includes the early stage founders, our partners and the production team behind the scenes ensuring the events were meaningful and engaging.

“The awards highlighted the drive and ambition of these incredible founders and the team and I at FIRST were privileged to provide a platform, albeit a digital one, to these incredible, resilient entrepreneurs. I am so excited to follow their continued journey to success – if you can start a business in a pandemic, you can literally do anything.”

Northumbria has been ranked in the top three for graduate start-ups in the UK, based on estimated turnover, since 2011/12, including five years in first place. Since 2009 the University has assisted in the creation of nearly 300 new businesses which have led to the creation of more than 1,000 jobs, the vast majority of which are in the north east of England.

WASHINGTON (BLOOMBERG, AFP) - Facebook is facing renewed fury from Washington after reports suggested the company knew, but did not disclose, that its … END_OF_DOCUMENT_TOKEN_TO_BE_REPLACED