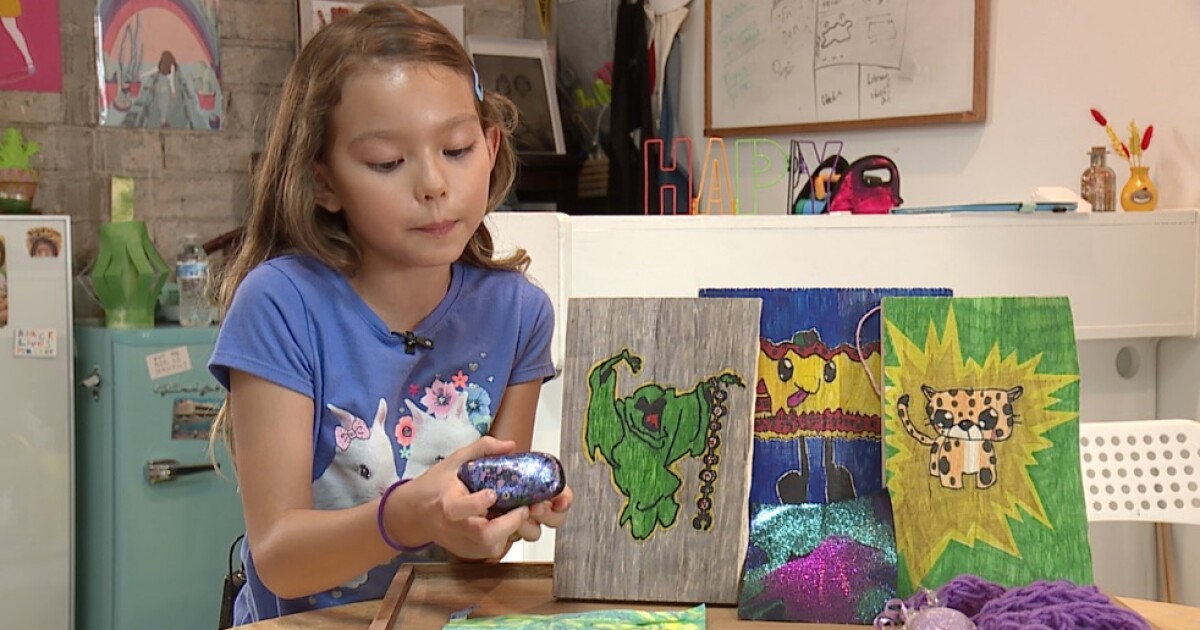 LAS VEGAS (KTNV) — At just 9 years old, Chloe Sligar is preparing to sell her works-of-art and other products in the Young Entrepreneurs Market on Saturday morning at Fergusons Downtown.

“I sell handmade art, which I’ve colored and draw myself and marbling art, and I call these galaxy rocks.”

Chloe has been inspired to become a business owner for years. Using recycled broken martial arts boards as her canvas, she draws and colors them. She also molds earrings out of clay, and knits her own scarves.

“When I was 3 or 4, my mom started a business and she made me the boss of it. So since then, I’ve just grown up in a boss environment.”

Chloe’s creations are cultivated through Future Makers, a learning center that sponsors educational and entrepreneurial workshops in an effort to support young business owners in their dreams and futures.

“As an educator, I worked in areas where kids literally needed funds to further their future,” said Melissa Flaxman, founder of Future Makers. “It also just lets them know that they are in charge of their own destiny; that they don’t need to rely on anyone else to share their ideas with the world.”

Jared Ardine is the co-owner of The Tiny Bloom, a full-service wedding event florist also specializing in retail. He says Future Makers are even inspirational tho him, and encourages the kids as they pursue a career in business.

“If you’re passionate about it, other people will see that and will want to invest what you’re interested in,” Ardine said. “Just not to give up, and not listen to those voices who say, ‘You can’t do it.’”

Ardine’s advice is invaluable to young entrepreneurs like Chloe, but she said there’s she had to learn the cardinal rule of business-owning the hard way.

The Young Entrepreneurs Marketplace will be held at Fergusons Downtown at 1028 Fremont St. in Las Vegas from 10 a.m. to 12 p.m.

WASHINGTON (BLOOMBERG, AFP) - Facebook is facing renewed fury from Washington after reports suggested the company knew, but did not disclose, that its … END_OF_DOCUMENT_TOKEN_TO_BE_REPLACED