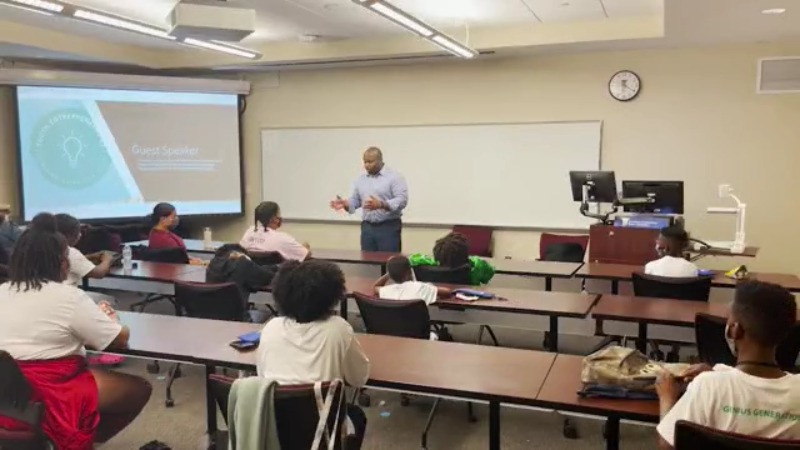 NEW HAVEN – They’re being called the Genius Generation – middle and high school students headed for success in this modern world.

“The city of New Haven actually had welcoming arms and said, ‘Hey, what is it you want to do and we will support you,’” explains founder of the program Laquita Joyner-McGraw, a mom, a doctoral student and an adjunct professor at Southern Connecticut State University where kids spend mornings, listening to community leaders like Senator Gary Winfield.

“We start off with academics, so, we’re learning about social issues, what social issues impact our community,” says Joyner-McGraw.

“We talked about different bills that were passed regarding police brutality – how it was affected and how it helped,” explains 10-year-old Bria Portee.

“They have all these ideas, they’re TikTok-ing and doing all these great things and we need to get with the new wave, so, we’re building on their future in a different way,” explains Jamie Baker-Vilsaint, Principal at the Barack H. Obama Magnet University School where kids spend the rest of the day. “We want to let them know there’s talents you can build upon and build your own future and have multiple ways to be successful.”

And the program certainly ignites dreams.

“I want to be a screenwriter and an actor,” says 16-year-old Mikayla Gardner.

“I want to be a fashion designer,” says Portee, noting that the program is helping her think about how she can reach her goals. “Learn more about fashion, study about it.”

It’s inspiring youth who will then turn around and feed the knowledge back into their communities.

“I always tell the students instead of begging someone for a seat at the table, now they’ll have the tools to make their own table,” says Joyner-McGraw who wants this work to continue. She’s asking for community leaders and local entrepreneurs to partner with the program to place students in internships and job shadows this coming fall.

Click here for more information on how you can take part.

WASHINGTON (BLOOMBERG, AFP) - Facebook is facing renewed fury from Washington after reports suggested the company knew, but did not disclose, that its … END_OF_DOCUMENT_TOKEN_TO_BE_REPLACED